THE CURL ON THE TAPAS 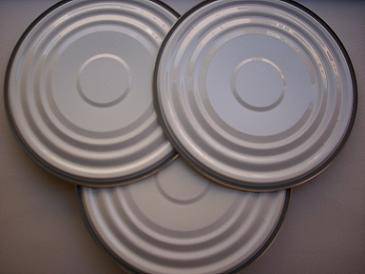 Description, function, types and measurements of the curls – or edges – of the wings of bottoms and covers.

It is designated by curl to the outer rim of a lid or bottom. It has a hook shape with its end inwards. It can also be defined as the outermost area of ​​the wing of a top / bottom. In drawing no. 1, the wing of a background is shown, marking on it the area of ​​the curl. 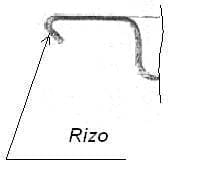 Drawing nº 1: Situation of the curl in a lid.

It can have different geometric shapes. Later we will detail them.

The wing as a whole is designed to allow the union between the lid and the body in a metal container, this is carried out by means of a double closure. The curl in particular will form the lid hook in said closure. For this, it will be rolled over the flange of the container body, and later crushed to form a compact assembly.

In a curl it is possible to differentiate two parts:

-1º.- Radio. Curvature that links the same with the upper part of the wing, which is more or less flat. In this area it will fold and crush to form the lid hook.

– 2nd.- Edge. Inclined section included between the radius and the cutting edge of the material. Its dimension can influence the length of the lid hook.

In drawing no. 2 appears the section of a closure where you can see the integration of the curl in it. 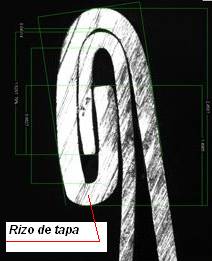 Drawing nº 2: Integration of the curl of a lid in its closing

There is a second use of the curl also very important: Allow the management of covers / funds easily. Thanks to him it is possible:

-Stack the funds aligned one on top of the other without fitting them. This is allowed by the support of the inclined part of the curl on the wing of the immediately lower one. See drawing nº 3

Drawing nº 3: Pile of funds resting on their curls

– Allow the one to one supply of the same in the feeders of gummies, packers or seamers, since it is possible to introduce sheets or separating devices between two consecutive loops.

– Facilitate the cash operation for its packaging in fixed quantities. Taking advantage of the protruding ridges of the curls, which appear in a pile of funds, you can use different counted devices.

– Manipulate the funds without danger of damage, because its cutting edge is protected by the curl.

The shape of the curl has evolved over time. Even initially, in the nineteenth century and first half of the twentieth century, the normal thing was that the lids did not have a curl, that is to say the wing of them had a flat and horizontal profile. The cover was punched in an inverted position by means of a very simple matrix, the wing remaining in its entirety as an extension of the radius of the tray. This way of operating still continues to be valid in certain cases, such as for large caps, which are handled manually in the manufacturing process. In the drawing no. 4 a lid of diameter 230 mm of this type is presented. It is also possible to curl it after its die cutting, during the gumming of it.

The normal thing is to use tapas with curl. It is carried out in two stages:

-1ª.- A first folding of the edge of the wing at 90º in relation to the top of it. This is done simultaneously with the punching of the lid on the press. This defines the material of the curl and its height.

-2ª.- A second step in which the wall is tilted towards the interior, executed on a special machine designed as a curling iron.

The geometry of this can be of two types:

1º.- If part of a cover design with the top of the flat wing, the final curl will be like that presented in the drawing No. 1, ie with its inclined and flat edge. It is usually used in covers / bottoms in a non-round manner due to its simplicity of execution in its two steps, both in the press die and in the curling iron.

When it comes to rectangular backgrounds, normally the inclined curl is only made on its two largest sides. When we are dealing with curling machines and their tools, we will deepen the reasons for doing so. The drawing No. 5 presents a rectangular lid with its two stages of embodiment of the curl. 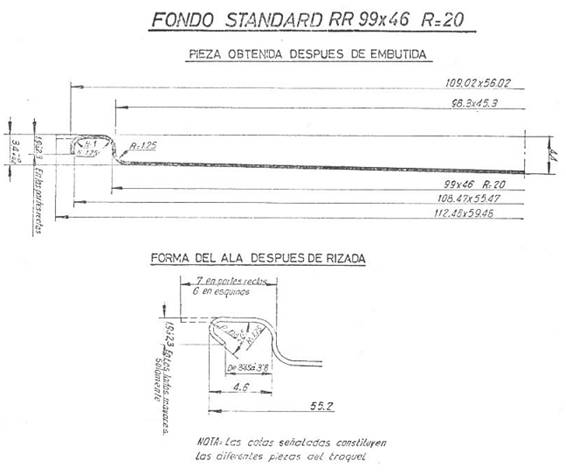 The normal inclination of the curl is 45º to 50º and its height is a function of the closing standard to be used, and therefore of the length of the wing of said bottom, although its normal value usually varies between 1.8 to 2.2 mm.

2º.- If it is a cover with a type of curved top wing, the curl can be made in turn in two ways:

a.- With its straight edge, like the previous type, which simplifies the crimper tooling, as shown in the lid reflected in drawing no. 6. 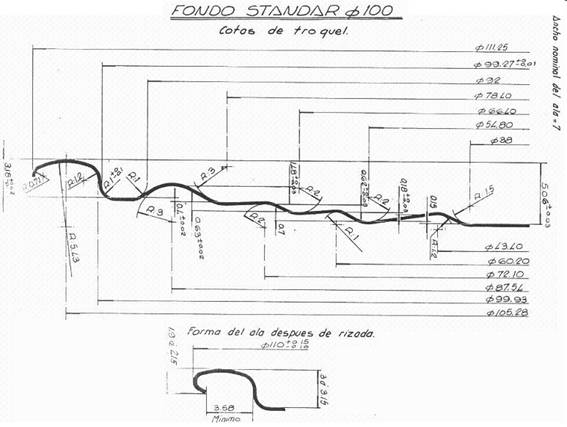 b.- With its curved edge, in harmony with the top of the wing. It is the most recommended design because with it the best closing results are achieved. Its use is the most widespread and is used in the most modern design packaging, as for example in the easy-open covers or with ring for drinks. The drawing no. 7 presents an example of this. 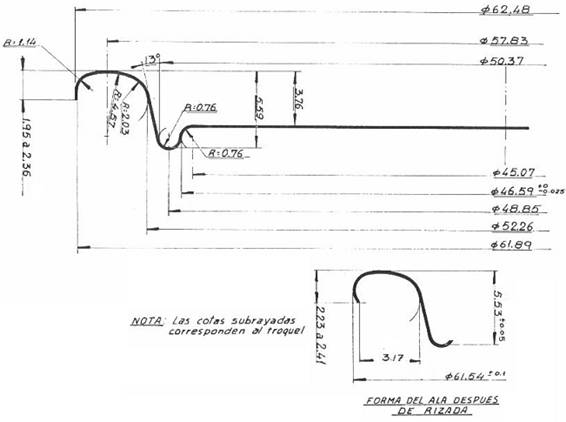 The values ​​of the radii that define the curl are indicated in detail in the work on design of curling tools. See the article for it:

The dimensions of the curl in this case are linked to the design of the tooling used, and may be greater than for the previous cases, since its shape is less inclined than when its edge is straight.

In summary, we can say that in all types, the dimensional values ​​of the curl vary with the type of closure used. Really the important fact is the total length of the wing, since its magnitude is linked with the standard of closure used in the operation of union between lid and body of the container This point was already presented at work:

– Influence of the bottom wing in the closure

In said article there is a summary table of wing dimensions, depending on the closure standard used. Therefore, as long as the wing has its correct dimension in total, the height and inclination of the curl is not critical, provided that a certain minimum height is respected so that the stacked funds do not get into each other, and can be distributed easily in gummies and seamers. In addition, the maximum height can not be exceeded without prejudice to the ease and quality of the bottom closure.

The data used for its quality control is its height, and it is also in an indirect way, using a gauge in which the covers / bottoms that fit in two inches are checked, as indicated in drawing # 8. 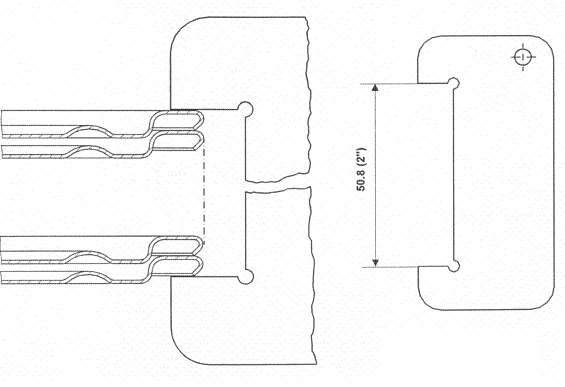 Drawing nº 8: Verification of the height of curl

The method to be used is the following:

–          Introduce a sufficient number of covers to fill, without pressure or slack, the gauge slot.

Alternative method: Fix the 50.8 mm measurement on a caliper and use it as caliber.

For guidance purposes we give the following values ​​as more common

This table is based on the type of closure: the theoretical length of the bottom wing, the recommended or suggested value for the height of the curl, its channel width – below we will clarify this concept – and the number of funds that can fit into it. the gauge control 2 inches high. In the case of the curl height and the number of funds in 2 “their maximum and minimum values ​​are given. The table is completed with the nominal diameters of containers in which each type of closure is usually used.

If you want to physically measure the height of the curl it should be done on a cover in four points at 90º, but due to the slight irregularities in the contour of the lid, a good practice rule is to measure the height of ten stacked backgrounds and take out the average. But keep in mind that the average height deduced from a column or stack of 10 lids – measured at 4 points at 90º – is somewhat smaller than the average height of the curl of an isolated background, due to the fact that each curl rests over the rounded edge of the bottom bottom. See figure 9:

The height H of the bottom curl if measured jointly – on average – in a pile is reduced by a value r. The error committed is approximately 0.1 mm in less.

Without damaging the quality of the closure, it can be accepted as minimum curl height, the smallest that absolutely prevents the funds from fitting together. A pile of funds that presents problems of “fitting” between them will probably be generated because the curls are low and therefore the funds rest on their buckets and not on their curls, this is not acceptable.

You also have to be careful to check that the pile of funds has a small side play, and that they do not tend to fit in the case that the depth of the bucket is maximum within the allowable.

Another important fact of a cover directly related to the dimensions and shape of its curl is its channel width – or width of bending -. It is understood as such the space between the edge of the curl and the outer wall of the bucket. See drawing nº 10 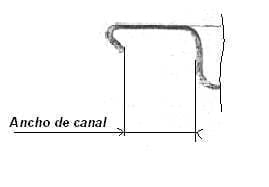 Drawing nº 10: Width of channel of the wing of a cover

In the drawings No. 5, 6 and 7, appears in each case, in the detail of the wing after crimped, bounded this channel width. Also in the box “Dimensions of the curl of the funds”, presented above, the minimum values ​​of the channel width recommended for each type of closure are indicated. Evidently they are interrelated with the length of the wing and the height of curl.

A minimum space is required in this channel to correctly secure two actions:

–          1º.- Application of compound in the gumming machine. If the application is by injection, there should be no interference with the nozzle or with the drop of the rubber drop. If it is by buffer or shower, must allow the passage of the tooling.

–          2º.- Introduction of the tab of the body of the container in the lid at the time of closure. The channel width must always be greater than the tab length so that there is no interference between the curl and the tab.

As we have already said, the curl is made on special machines called rizadoras – also orleadoras or viradoras – that are attached next to the press that punches the lid. They are fed by gravity and consist of a system of discs and segments. A detailed explanation of these machines can be seen at work: