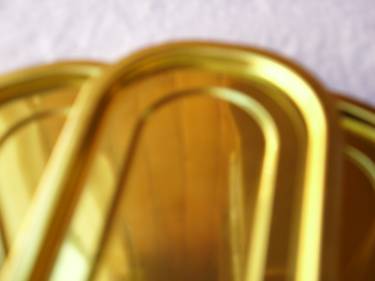 This work describes the possibility of curling the funds in a non-circular way simultaneously with their die-cutting. For this purpose, the necessary modifications to be introduced in the design of the conventional manufacturing die are detailed.

There are two classic ways to perform the curl initiated in rectangular or oval backgrounds. The most usual is to do the same only on the two larger sides, passing the bottom through the two discs of a curling iron for shape funds. Another more complex, is to curl all the contour, using different systems (tampon tool, curling head, etc). Both are always operations after the die-cutting.

Getting a good quality curl around the periphery of rectangular or oval backgrounds is not easy. Especially in the case of rectangular backgrounds, if the radius of the corners is small. There is a clear tendency to the formation of wrinkles in the curl, which generate a poor quality of closure in these areas.

These wrinkles and folds, are a consequence of the compression efforts, arising when the external dimensions of the background are reduced. The smaller the radius of the corners or the thickness of the tinplate, the greater the problems.

With the design of die that we describe, in a single operation the cutting of the material is made, the conformation of the cover and then the realization of a curl at an angle around the perimeter.

DESCRIPTION OF THE FORM AND CURLING DIE

It is based on the principle of shaping the curl, increasing the external dimensions of the background after die-cutting. In this way, the efforts on the area of ​​the curl are not compression – as was the case previously mentioned – with which the presence of wrinkles is eliminated.

Figures 1 to 4 of the lower sequence show the operating principle of this forming and crimping die in a single operation. Some pieces of the tool present special characteristics in relation to a conventional one, such as:

The working sequences of the tool, which are represented in figures 1 to 4, are the following:

a.- Figure nº 1: Cutting.- At the moment of cutting all the “active” pieces – in contact with the tinplate – are at the same level. The design of the die must do to fulfill this premise. 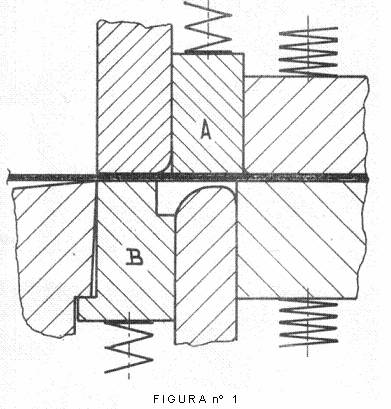 b.- Figure 2: The punch has finished its stroke and is in the bottom dead center. The background is already stamped. On ejector ring A the efforts of an elastic pressure system are acting. A wedge has been formed on the radius R of the matrix center. 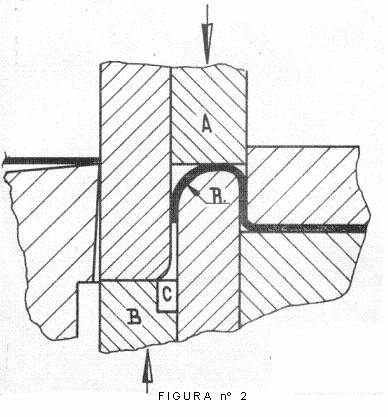 c.- Figure nº 3: The punch starts to rise. The bottom of groove C of the presser ring B comes into contact with the lower edge of the bottom groove. In this way the formation of the curl begins, generated by the action of the ring pressure system acting on the ironing ring. 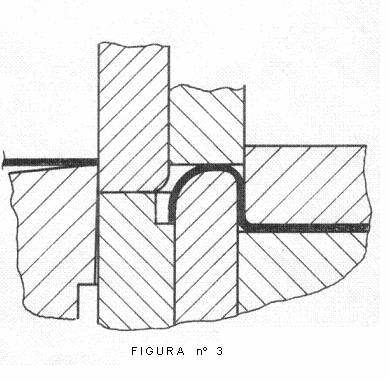 d.- Figure nº 4: The radius of the prerizo has been reduced while its external dimensions have been increasing, forcing the material towards the outside. The ejector ring A is placed at the same level as the punch completing the formation of the curl.

The finished bottom is raised with the punch in a conventional manner and ejected at the top dead center of the stroke.

In this way we have the background ready to be gummed, without the need to resort to a curling system. The gumming can be done by any of the systems typically used: tampon, shower …. with the precaution of adapting the tooling to the actual width of the curl channel.

This system, in addition to the advantages already described, presents another important: The best stackability of the funds at the exit of the press as it prevents them from fitting into each other, which is very common with conventional tools.

“U” LINE FOR RECTANGULAR ENDS

PACKAGING OF COVERS AND ENDS

CONTROL OF ENDS IN DIE

USE OF A DIE FOR ENDS