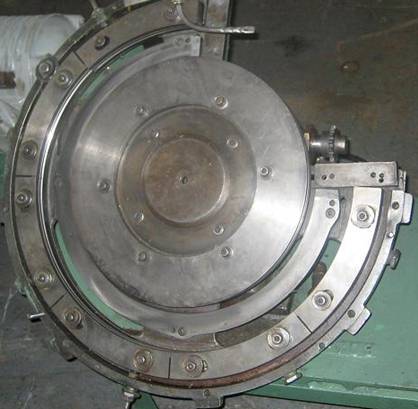 As a complement to the works already published:

we develop here the way to make the design of the tooling of the curling machines. As explained in the previous articles, these machines turn the edge of the funds to be able to manipulate them without fitting them together, and facilitate their closure.

He also indicated the different types of curling irons used for the different uses. Now, following this classification, we will see how to prepare a tool for each one of them.

In this case, the hauling is done by means of a tooling consisting of two parts:

The bottom passes between them, lodging its edge in the channels that both parts present in its side. The central disc transmits a rotation movement to the bottom, rotating the latter on itself at the same tangential speed as the central drive disc. Being in bottom of a much smaller diameter than the disc, the number of revolutions of the first is much higher. Throughout its journey the bottom is rolling on the fixed outer sector.

Disk and segment, as we have said, have lateral channels, with a special profile that copies the edge of the bottom when passing between them. See figure # 1

Figure nº 1: Section of the tooling of a curling iron.

The outer part of the disc is a large diameter steel ring, close to half a meter. It must be completely flat and the working channel must be maintained precisely in all its perimeter parallel to its base. This disc has to turn in a single plane, that is to say its axis must be perfectly perpendicular to its base. It is fixed to the central cores by means of screws and does not allow adjustment or adjustments, except in the number of revolutions per minute if the machine is equipped with a variable speed drive.

To extend its life, it is reversible, giving it a double working profile in reverse position. So when a channel is worn out you can flip the ring and double your life. When both are out of measure, it is possible to redo your profile by subjecting the ring to a new machining and grinding. The number of times this operation can be performed is delimited by the maximum possibility of moving the segment in its housing as we will see later. Drawing No. 2 presents the section of a disk, with its general measurements. 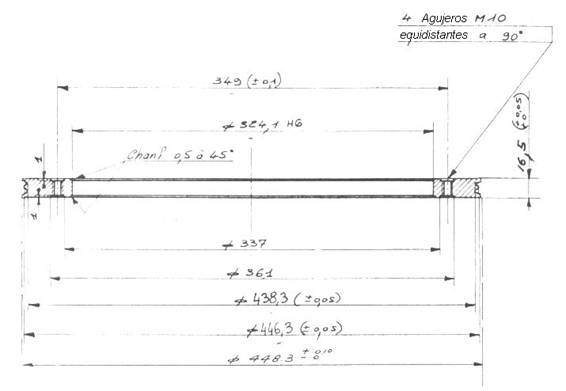 Figure nº 2: Section of an annular ring of a rizadora disc

These rings are made of tool steel, treated, with an approximate hardness of 60 HRc, with the profiles of their rectified grooves with mirror finish so as not to damage the external varnishes applied on the backgrounds.

Figure 3 shows the most important location and measurements of the channels in the inverted position of the disc in figure 2. When we describe below the characteristics of the profiles of the curling tools of the different types of wing curl, we will detail more measurements of these profiles. 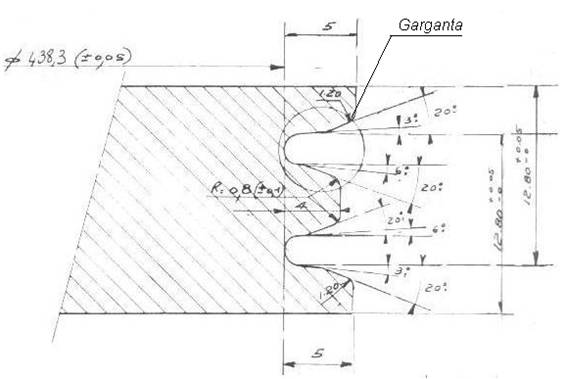 Figure nº 3: Detail of curling profiles on a disc

As already said, the fund circulates between the disk and the sector. The function of the disk is to drag and rotate the background. In truth, the piece that shapes its shape is the fixed outer sector, on which the bottom rolls. The sector is formed by a series of pieces, normally 6, equal to each other, except the first and the last. In total, it covers a space of approximately 270º, and each one of these pieces can be slightly adjusted in its distance to the center of the rizadora by means of screws, see header photo of this article. This way you can reduce this distance slightly from beginning to end to force the bottom in its turn to turn its edge. It is also necessary to redo this adjustment every time the profiles of the disc channels and the segment itself are reviewed and rectified.

The initial and final sections of the disc have chamfers that facilitate the entry and exit of the bottom in its channel. This channel can be the same as the disk, although there are some manufacturers that make it with slight differences., Because as we have the disk only drag and therefore its profile is not what defines the shape of the curl, while the outer sector yes.

An example of an intermediate section of a sector, in particular the one corresponding to the disc of figure 2, is presented below in drawing no. 4. 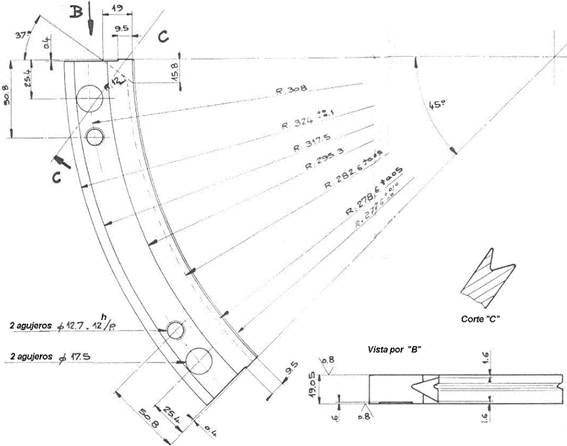 The sections of the sectors are not reversible. The material, machining and hardness are similar to those of the disc, with which they work together. A detail of the profile of the sector of figure 4 is indicated in figure 5, it shows its shape, averages, angles, tolerances and degree of finishing of the surface of the working channel or throat. 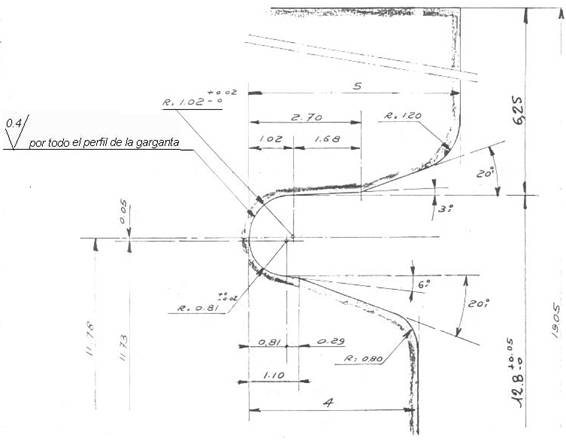 Figure nº 5: Detail of the throat of the sector of figure 4

Let’s see now the different types of throats that can be used depending on the design of the wing of the farm. We have already indicated the various types of curl and wing tips that are usually used in the funds. Watch:

Following this classification the forms of the throats can be cataloged in:

It is the simplest design. The channel consists of a single radius with some entrance and exit angles. The entrance, to facilitate the introduction of the lid, is small, and the output – greater – is what gives the inclination to the curl. The radius is usually in values ​​of 1 mm. approx. See figure # 6. 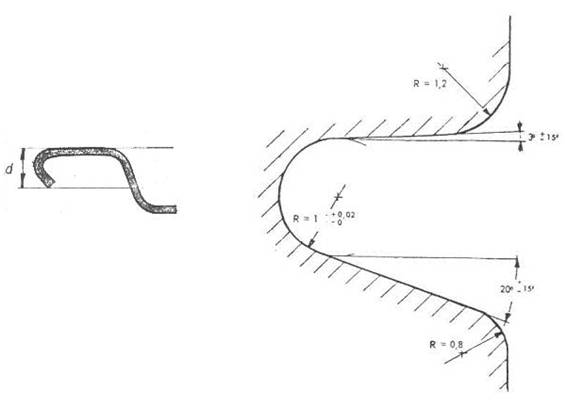 Figure nº 6: Curl and curled profile of the tool for flat top wing

It is used for round bottoms of low productions, made in non-low material thickness and reduced temper. That is for example for tinplate “simple reduced”. Concrete cases of use: domes and funds of aerosol containers, industrial products … In this use, the disc and sector have the same throat profile.

b.- Throat for the bottom of the wing of the double radio

In this option is when you use more different profiles of throats on the disk and sector. The sector can be double radius, and even double angle of entry and exit, see figure No. 7. The disk does not require this contour. The profiles presented here are the same as those used in the example of the drawings No. 2, 3, 4 and 5.

Figure nº 7: Curl and curled profile of the tool for top wing with double radius

They are the most used. They are used for the full range of funds for food use and at high working speeds and high production volumes.

This type of wings was developed for funds made with materials of low thickness and high temper. This implicitly implies a certain reduction in wing length. To make the curl, without generating wrinkles in it and its shape to facilitate the making of the closure, a new design of curled throat profile was configured. 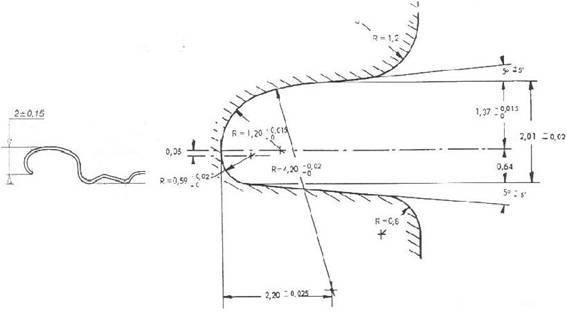 Figure nº8: Curl and curled profile of the tool for top wing with triple radius

We insist that this design is used when working with materials of leda hardness and reduced thickness.

This type of machines – which was already talked about at work

– It has a very small job and only for funds of low quality. For that reason the design of the wing of the same ones is of the form of flat summit. Both discs have a throat of the same profile and the most used is the one shown in figure 9 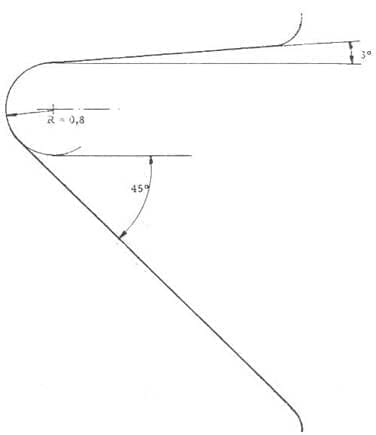 TOOLS FOR ROLLERS OF COUPLES OF DISCS – RECTANGULAR FUNDS

The discs, of curling irons with double pair of them, when they are used for non-round bottoms – rectangular or oval – can be made of several superimposed pieces. In this way its construction is greatly facilitated. For example, each disc can be made in 3 pieces, one with a slightly larger diameter that would constitute the upper part of the disc, an intermediate one with an inclined profile and smaller diameter that would give shape to the curl, and a third that would be its base. Drawing No. 10 presents a section of a detail of a disk in three pieces.

For funds of non-round shape, whose curl is turned on a curling machine – there are other procedures to do it -, the design indicated above is of usual use.