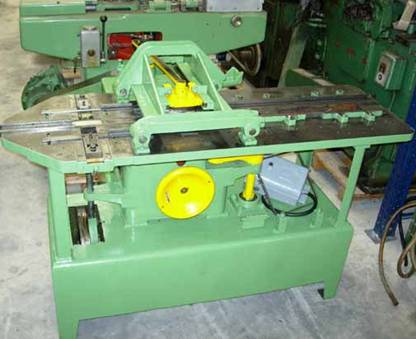 Gumming machine by buffer (without stackers)

To curl non-round backgrounds, the classic procedure is to turn the edges of its two larger sides at the exit of the press, on a curling iron formed by a pair of equal discs that rotate in the opposite direction. This system is simple and economical, but has the disadvantage of leaving the two lower sides of the bottom and the corners without curling. This hinders the operation of gumming and closing.

Therefore, little by little, different curling systems have been imposed, allowing the same to be done in the entire periphery of the bottom. The possible solutions are varied, from the adaptation of a press, endowing it with a system of feeding of units, realizing the same by buffer, until machines designed especially for it of automatic way. This always entails a certain investment in equipment.

In this work we present an alternative to perform the total curl, in a simple and economical way, taking advantage of a gumming machine by buffer for non-round bottoms. It is common to have machines of this type in the warehouse of equipment out of use, or in the second-hand market. Therefore investment in machinery is zero or cheap. Starting from this machine, it takes advantage of its mechanics, as a feeder of funds, table, sweeping conveyors, stacker … and it is equipped with a simple tooling to make the curl.

As the curling operation requires very little effort, it is possible to use the one that is capable of transmitting the carrier head of the primitive gumming pad. The system consists of mounting on the table of the machine a tool, composed of a fixed bottom part, and an upper part, which has an alternative movement in a horizontal plane, supported on the head of the gumming machine.

The lower part, as we have said, is attached to the table of the gumming machine. It sits on it by means of the holes or threaded holes used to fix the tooling of the rubberized machine. The upper one performs the curling operation when it impinges on the lower one. Figure 1 shows a section of this tool. 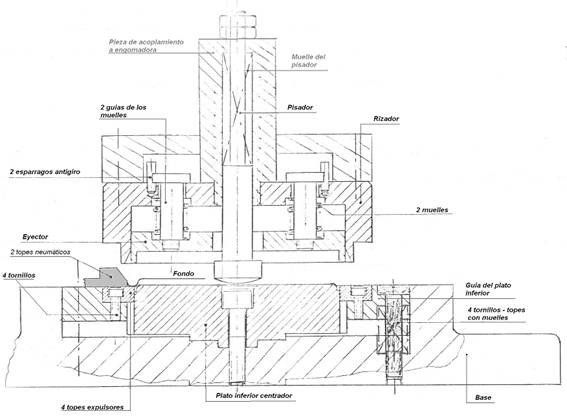 Figure no. 1: Curling tooling in the adhesive machine

The process of flanging is as follows:

1º.- Feeding: As you can see in the drawing, the bottom feeds inverted. Its origin can be from a press located at the head, linked to the gumming machine by means of a conveyor, or from the stacker of the gumming machine itself. In this second case, it is convenient to pre-rinse the bottom at the outlet of the press by means of a double-disc grinder.

2º.- Displacement: The bottom advances and is placed on the tool by means of the original nail bars of the gumming machine.

3º.- Positioning: This fund is positioned at the correct point, precisely by means of a pair of pneumatically operated stops. These stops stop the bottom in the right place, and are moved by cylinders of horizontal assembly and of little career. They are synchronized with the movement of the upper part of the tool, and are removed when said head acts on the cover. See drawing no. 1. To improve your positioning, you can also place, in the table, some small magnets that slow the movement of inertia of the bottom, although it is not very advisable because they can be a source of streaks by retaining the metallic powder on them .

4º.-Rizado: In its downward movement the upper part of the tool performs the following actions:

–          The central “plunger” stem, by the action of its spring, remains fixed to the bottom during the ripple operation.

–          The “curler”, by means of its conical lip, first pushes the “lower plate” – which is guided in four points and kept floating by means of four springs -, and then acts on the edge of the bottom forming the curl . See figure no. 2. In this action the bottom remains centered when staying in the “lower centering plate” 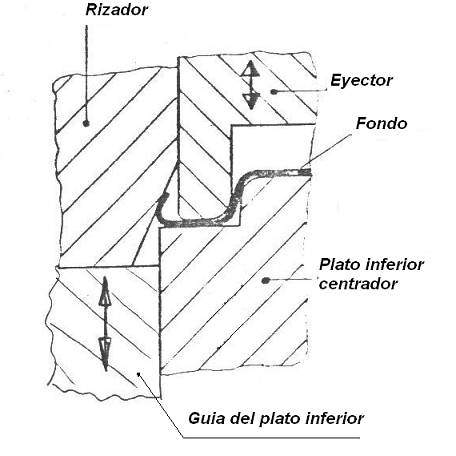 –          When the tool begins its upward movement, first the “lower plate” pushes the bottom upwards by means of its springs, dragging it in four points – 4 small “ejector stops” – and then the upper “ejector” loaded with springs, extracts the bottom of the “curler” and leave it deposited in the lower part of the tooling.

5º.- Ejection: Once the curling operation has been completed, the bottom moves towards the stacker of the gumming machine pushed by means of the normal bars of the machine.

–          This procedure is really applicable for funds of any shape – rectangular, oval, mandolin … – even round, although for this last type it does not make sense, because the common system by disc curling machine is more efficient and gives higher quality.

–          Depending on the gumming machine available, on the tool design presented in figure 1, modifications will have to be made to adjust it to the characteristics of the head and table of the machine.

–          The speed of curling is low, since these machines work at a low rate, but may be sufficient for moderate productions.

–          This same type of tool can be mounted on a manual press, but it will be necessary to equip it with a bottom feeding system, which can be designed from pneumatic material.

EVOLUTION OF THE FUNDS PROFILE DIAMETER 99