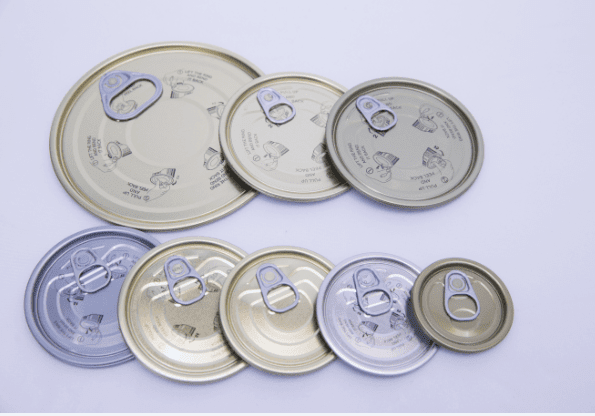 Simple description of the different stages of manufacture of an easy-open cover, from the cutting of the sheet metal coil, TFS or aluminum to the packaging of the lid. Article addressed to those not initiated in the subject, as an introduction to it.

In the metal and canning industries, it has been given the name of an easy opening lid, which can be opened without using any external element, such as a can opener or similar. To do this, it is equipped with an incision – through which it tears – and a ring that allows to initiate the break and pull to extract the central panel. See figure nº 1.

To have a more complete idea of ​​how it is a lid type easy opening, its constitution and operation is desirable to read the work “Easy cover opening for preserves”, published on this Web. In what we now present, we will not focus more on these aspects. The objective of the current one is to indicate to the uninitiated, the different phases of manufacture of this type of caps, and the necessary means to carry them out.

Figure 2 shows these phases and their equipment in outline, which we can list as follows:

–          Varnishing and lithography of the same (Not represented in the drawing)

–          Conversion of the sketch into easy opening lid with the addition of the ring.

–          Protection of the incision and damaged areas of the lid by means of a varnish.

We will sketch each one of them below.

The cutting of the sheet coil for the manufacture of this type of covers, in nothing different from another type. It involves cutting the tinplate coils, with zigzag blades, into a cutting line of coils, forming packages suitable for the following operations. Drawing No. 3 presents the typical silhouette of a cut sheet.

Figure nº3: Form of a leaf cut in primary scroll

The cut has this contour to make the most of the material, adapting to the shape of the cutting disc of the die forming the lid. The lines of cut of coils used have a multiple use, obtaining his maximum utility in material for round bottoms, because in them the greater saving of metal is obtained.

The top photo shows a primary scroll cutting die for round caps. It is a very robust tool, guided with 4 columns, built with carbide inserts, which gives it long life.

The easy opening covers require more complete varnish protection than a normal background, due to the hardness of their manufacture. The formation of the fixation rivet of the ring, the opening incision and the formation of the central panel force deep impacts and deformations. For that reason the system of varnishes inside is very complete, applying several layers of them that can be of various types, polyester, epoxy-phenolic, organosols … On the outside the damage is even greater, therefore at the end of the process it will be required a new varnish application.

To apply them flatly, on the sheets, the conventional technique of roller application in a coating machine is used, followed by baking and curing in a continuous oven.

If the covers carry some type of impression, for its application the conventional procedure is used. In the design of this impression, in the case of round caps, it must be taken into account that the position of the ring, on the lid panel, is random and can be covered by it, so if it is a question of texts legal or imperative will need duplicate in opposite positions, to ensure that at least one can be read.

The packs of varnished and printed sheets are fed to the first machine of the manufacturing line of the lid, which is a shear for cutting into strips – or strips -. To improve the use of the blade, the cut is also zigzag .. The shape of a cut band is as indicated in Figure No. 5.

Both the feeding of sheets to the shear, as the conduction of the strips cut from this machine to the press, is carried out automatically by means of conveyors. In the lay-out shown in figure 6, the location of the scroll shear is represented by the letter “a” .

This lay-out shows in the plant the complete installation of an easy to open caps manufacturing line, from the scroll to the packing station.

Figure nº6: Lay-out of a line for easy opening lids


In it we can see that four “inputs” of raw materials are required, obtaining only one “output”, which are the finished and packed lids. The complexity of the installation and the high degree of automation of it are appreciated. For this, a transport network is used between machines, by tapes, controlled by programmable automatons. The joints by conveyors between machines fulfill a double purpose, automatically linking them and creating lungs that stabilize the production and reduce the number of stops.

CUTTING AND SQUEEZING THE SHELL

The bands are stacked on the press warehouse that is going to cut a first approximation to the shape of the cover – which is called a sketch -. In the preceding lay-out, the position of this press is indicated with the letter “b” , which in this case are two, necessary to match its speed to the next multi-station press, which has a double cadence. These presses are equipped with a double punch tool that punches the sketch.

The sketch is shaped like a background with a flat central panel. In the back of the press is located the double curling iron, which turns the rim of the same to facilitate its handling in piles without fitting into each other.

By means of conveyor belts, which at the same time function as accumulators, the sketches are transferred to the gumming machines that deposit the compound on the wing, to ensure a hermetic closure of the lid on the container. Letter “c” in the lay-out. In the case of using water-based compound, the sketches must be passed through drying ovens to eliminate it and facilitate the polymerization of the synthetic rubber.

Figure 7 shows the skeleton – or cutout – of material once the sketch is stamped, and said outline in the subsequent steps of punching, curling and gumming.

When the compound used is of the water-based type, it is convenient to keep the manufactured sketches in stock for some time, so that they cool down and finish removing the humidity. If the compound is solvent based, it does not require the use of an oven, since the liquid phase of the rubber evaporates at room temperature, and also completely and quickly. In the latter case, the sketches can be fed directly from the gumming machine to the multi-station press, although the system used for conveyors allows an important accumulation of units between both machines.

The manufacture of sketches from bands on double punch presses, is being replaced by the use of multipunzón presses that are fed whole sheets. This installation allows higher speeds, but supposes a greater investment.

MANUFACTURE OF THE COVER

The transformation of the sketch into the lid is done on a multistation press of great precision and certain tonnage. The sketch moves through the different stations step by step, either linearly or on a turntable. In the different seasons actions are being carried out on the lid. In figure # 8 of reflects an example in 6 steps. 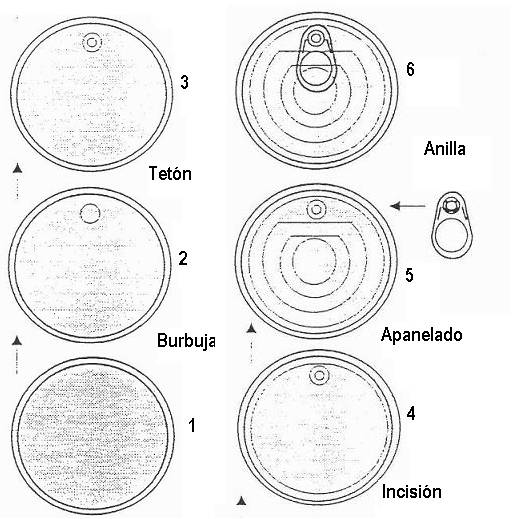 Figure nº 8: Steps in the manufacture of an easy opening lid

In the first operations, a bubble is formed, which is then transformed into a lug of smaller diameter and vertical walls, which will later receive the hole in the ring and be riveted to fix it. In the intermediate steps, the incision is made for the tear and the central panel of the lid.

The most delicate operation is the execution of the incision, which has to have an exact depth to allow a soft tear. If it is scarce, the opening effort will be excessive, and if there is too much there is a high risk of exploding the lid during the process at the canner’s house. To ensure accurate incision, the press carriage, at the end of its downward travel, collides with very solid fixed stops, adjusted in such a way that they do not impede the rotation of the crankshaft. Photo No. 9 shows a press with these characteristics. On the lay out of figure 6 this press is represented by the letter “d”.

The tooling for the manufacture of these covers is of high precision and high quality of execution. There are different patents of caps that use various versions of incision type, with various ring models.

MANUFACTURE OF THE RING

The ring is usually manufactured in the same multi-station press, starting with tinplate, TFS, zinc-plated material, or aluminum with particular characteristics. The tool, of numerous stations, also has a complex design. Figure 10 shows the manufacturing sequence of a widely used ring example. You can see that you need up to a total of 14 steps, where you combine cutting, drawing, folding, bending and trimming actions. In the ring there are three dimensions of great importance with very tight tolerances: the diameter of the hole that will be inserted in the lug of the lid for its fixation, the distance of this hole to the nose of the ring and the configuration of this nose. It is designated by the nose of the ring, the end of which will impinge on the incision, to initiate the opening of the lid.

The ring die is mounted on one side of the main tool, on the multistation press, and the rings are fed directly on the lid, without accumulation or storage thereof. In photo 11 the lower part of a ring die is seen, of a design different from the sequence presented in figure 10.

The cover mechanically is finished, but during all the process the varnishes that cover the metal have undergone a strong deterioration. When making the incision, the exterior varnish system has broken along it. Also, the rivet fixation of the ring has damaged the varnishes in this area. Therefore the risk of external oxidation of the lid is safe. To eliminate it, a new varnish application is used on the outer face of the lid. It is carried out by means of a spray nozzle that sprays the same on the surface. This mouthpiece can be static or mobile. This second case is more effective, because it can have a path following the shape of the incision. There are several models of equipment in the market of both versions. Figure 12 shows the lid in the rebarn position. 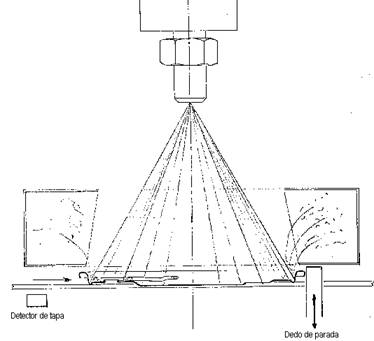 Figure nº 12: Rebarnizado of a cover of easy opening

In the lay out of figure 6, in the zone marked “e” , a battery of 4 rebarning machines can be seen.

After the rebarnizado machine, well mounted on the same base and independently, is located an oven for drying and polymerization of the varnish. They are ovens of vertical structure, which occupy little space. The cover travels an ascending and descending path, traveling a double distance from the height of the oven, keeping in a horizontal position supported by chains of special fingers. In the aforementioned lay out there are also 4 ovens in the “f” zone .

Before packaging, covers are usually checked 100% by means of some system of inspection by automatic optical vision, complemented by a statistical sampling of the evolution of its different parameters.

The packaging is made in paper or plastic bags by means of automatic equipment, which counts the preset amount of caps and puts it in the bag. Team “g” in the lay out.