In order to achieve savings in tooling for primary scroll cutting of coils, it is possible to obtain a cutting design for sheets, both for strips intended for double or for simple die. This work describes the appropriate calculations for its obtaining, taking as a starting point, the primary “scroll” cut for strips destined to a double punch.

Sometimes it can happen that different products – caps, aerosol cones, capsules, … – have an almost identical diameter of material cut, but that they are manufactured in equipment of different design. So one of them can be manufactured in a press that works with a simple die, and therefore is fed with simple strips, and another of almost equal cut in a press equipped with double die, which receives the strips of the latter type. A typical case of the first option is when a simple die press is fed by gravity. Of the second are the traditional presses equipped with lateral storage.

It is possible to achieve a significant saving in tooling, in the line of cut of coils, designing a cut in “scroll” primary, so that it is valid to obtain both double and simple strips, when cutting in the shear “scroll” of second operation .

To determine the proper distribution, we have started from the previous calculations of the cut in “primary scroll for double strip.

A practical case of the aforementioned, can be given in the manufacture of caps for canning containers in diameter 73 mm. – which are normally obtained from double strips- and 65 mm cones. in simple strip. Although the material is different, its cutting diameters are almost the same and the same primary scroll tool can be used to cut its respective coils, whose width practically coincide.

To make it possible to use the same primary scroll in the subsequent cutting of single and double strips, the following conditions must be met:

If the cutting diameter of the part to be obtained, in the case of double strip we call it D1 and of single strip D2 , it must comply:

D2 min = It will depend on the objective of efficiency that we have marked.

If we designate b to the stroke or advance of the blade for each stroke – stroke of the shear bars “scroll” – for the case of double strip and for single strip, the following must be fulfilled:

b2 is the distance between the center lines of two contiguous rows of cuts in two adjacent double strips.

g is the distance between centers (See figure # 1)

3.- Configuration of the primary scroll

e = min. 0.3 mm. in order that the cut of the secondary “scroll” for free single strip – does not coincide with – the configuration of the primary “scroll”. (See figure # 1)

4.- Depth of the cut in “scroll” for simple strip and width of this strip

(t = clipping on the double strip; 0.05 is determined empirically)

5.- Extra width of the coil

Where K is the maximum width of the double strip.

In practice, this required increase in the width of the coil is approximately 1.8 mm.

A tool for primary “scroll” can be designed to be used in the cutting of reels in sheets destined for single and double strips.

The application is limited to a minimum difference between the cut diameters equal to the cut in the double strip, while the maximum difference is determined by the minimum acceptable efficiency. The width of the coil, taking as reference the appropriate value for “scrolar” in first operation sheets for double strips, must be increased approximately 1.8 mm 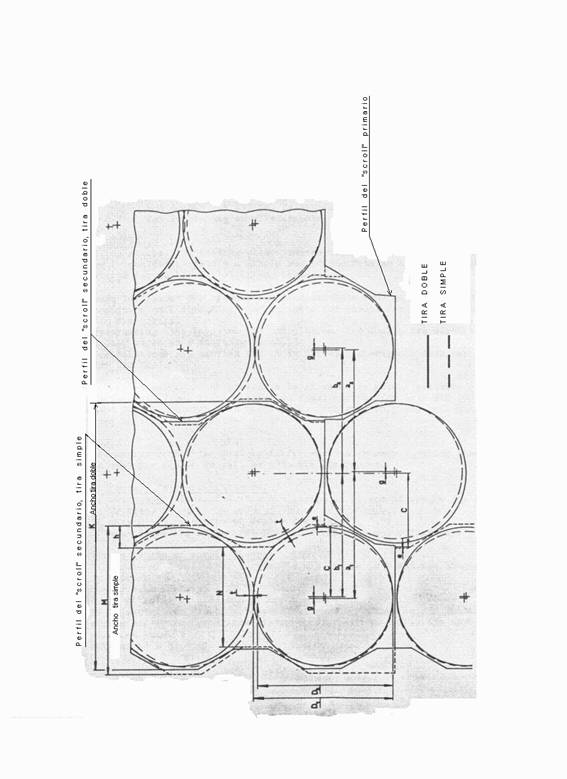 DETERMINATION OF THE WEIGHT DRY FILM OF VARNISH

DETERMINATION OF THE COURT FROM A ENDS