One of the last improvements made to canning containers has been the reduction of the diameter of the bottom. This paper explains the reasons for its origins, the advantages and disadvantages of this improvement, the basic measures of notching and how to do it.

This development began in containers for drinks type three pieces of diameter 65, that in the end of the decade of “60” of the last century, appeared in the market equipped with a lid with opening by ring of diameter 62, and a bottom of Tinplate of the same diameter. In other words, they had a reduction in diameter or notching at both ends. This novelty originated in the United States. The reason for this innovation, in the beverage market, was fundamentally economic, since the large volume of business justified any minimum savings.

The following three-piece containers that were notched were aerosols. The matter began in the United Kingdom. Specifically, the Metal Box company in 1978 launched some prototypes of containers for this destination, with reduced diameter at both ends (dome and bottom). This design was designated “trimline”. See photo nº 1: 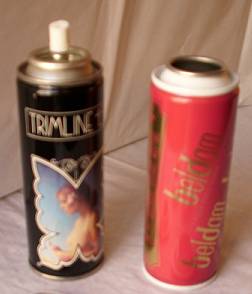 In the aerosol containers, on the contrary, it was not the reduction of costs, the decisive factor in the introduction of the reduction of diameter or notching, but the aesthetic one. The biggest competitors of these tinplate containers were those manufactured in aluminum by the extrusion technique. Especially in the market of products of a certain value, such as those intended for personal use, (lacquers, deodorants, foams, …) For these uses, the elegance of the “monobloc” aluminum container, with all its generatrix in a straight line, without projections or seams, it surpassed the one of three pieces in tinplate, whose flanges of the closures of the dome and the bottom, and the welded lateral seam disfigured its image. The introduction of electric welding, with Soudronic technology, significantly improved the appearance of the body of the container, since it allowed a greater lithography stain, reducing welding reserves to a minimum. This was a clear advantage over aluminum aerosols, which had serious limitations in the lithographic design, to be decorated after being manufactured, and not in a flat plate such as tinplate.

Even so, the flanges of the closures, linked the image of these aerosols to the idea of ​​a market for cleaning products, home and gardening, a cheaper and more competitive product line. The company Metal Box devised to reduce the diameters of the ends of the body, and therefore the closures of cone and bottom, up to such a value, that the diameter of the closure of the bottom coincided with that of the body, and the diameter of the closure of the cone more the thickness of the wall of the plastic cap also coincides with that of the body. In this way the silhouette in height of the spray was a very elegant straight line. This entailed that the dome should have a smaller diameter than the bottom.

The idea was a total success, and in a few years the European tinplate aerosol packaging market evolved towards this design, earning a good spot for aluminum. The American market followed only in part.

There was also some savings in raw material, but this alone did not justify the high level of investment in equipment and tools.

A few years later, specifically in 1986, the French company Carnaud, directly linked to Metal Box, decided to apply this idea of ​​reducing the diameter of the bottom of the container to cans of three pieces. In this case the reason was not the same as for aerosols. The origin was in giving a good solution to the lack of stability of the stacks of canning containers, which increasingly, mounted on large shopping centers and hypermarkets, the most important brands to promote their products. These piles were not firm, with frequent collapses. This is how a first container was designed with the format of the highest circulation – ½ kg – with the bottom reduced. This container was marketed for the first time in France in 1987. Its acceptance was good, and little by little it was extended to other diameters and to other European countries.

In the case of containers for preserving, only the bottom was reduced to a value such that its outer diameter of closure was slightly smaller, than the interior of the tray of the normal lid. In this way it was possible to fit the bottom of a container, with the lid of the immediately lower one of its stack. The set gained significantly in stability.

The exposed cause, although it was perhaps the most important, was not the only one that promoted the success of the fitted containers. There were also reasons for cost savings, product image, as well as the creation of barriers to competition. As a summary and explanation of all of them, the following enumeration of the advantages and disadvantages of this type of packaging can be made.

a.- Economic savings. The reduction of the diameter of the bottom, diminished the surface of necessary material for its manufacture, therefore also a saving in its raw materials like tinplate, varnishes, compound …. For example, in the case of ½ Kg, diameter 73, the bottom was reduced to 70 mm.

b.- Stacking. It is already commented previously. It was an essential advantage to be able to arrange the containers in stacks, in display cases, shelves, promotion points … well grouped, in a stable and firm way. Saves work, time and losses of full containers hit.

c.- New image. The canned tin packaging, because it has a long presence in the market, has a certain not very innovative product image associated with it, and perhaps of old for many potential customers compared to other packaging modes. With this new presentation, its shape changes and shows a more modern profile, which can help its commercialization.

d.- Since the metal industry is a very mature sector, there are few technical barriers that filter the access to it of any company, however modest, generating a sometimes suffocating competition. The incorporation of the entallado requires a mastery of this novel technique, and the necessity of investments of certain amount, that do of brake to the degradation of the market.

a.- The main one, the need for a strong investment in:

– A new machine to be installed in the manufacturing line of the container – entalladora – with its precise auxiliary equipment (elevators, conveyors …).

The worst thing about this investment is that it may not increase activity, since it involves splitting into two sizes the previous production of a single type of tapas / funds. It is also difficult to pass on the same in the final price of the new container. Therefore, the investment has a doubtful amortization.

b.- It is now necessary to create two stocks of accessories where previously only one was needed. One for the classic lid and one for the new background, for the same activity. This is only true if conventional lid is used. On the contrary, if the lid is easy to open, the situation does not change.

In the drawing below reflected, a notched container with its respective lid and bottom positioned at its ends is represented, and also the closing mandrels necessary to fix them are shown. The fundamental measures are outlined on it, each one designated with the first letter of the word that refers to its origin. For example “Dru” (value of the diameter of the straight end in the tooling ). See figure nº 2. 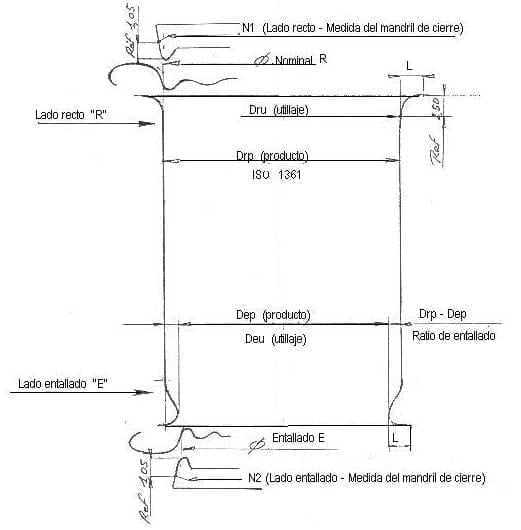 Following the SEFEL recommendations, the values ​​of these dimensions are summarized in the following table. These are recommended levels, which not all manufacturers use, but most of them are quite close to them. As you can see, the notching ratio, the difference between the diameter of the straight end and the notch, is in all formats close to 3 mm, except in large diameters. See figure 3

In the case of aerosol containers, which, as mentioned at the beginning, preceded those for preserving, the notching is carried out at both ends and at different values, with the side of the cone being smaller, in order to ensure that the plastic cap is laterally aligned with the cap. body of the container by its exterior. In the following drawing, which shows the body of the container already notched and flanged, the values ​​of the internal diameters are indicated at both ends. See figure nº 4.

Figure nº 4: Values ​​of the internal diameters of both ends in notched aerosol containers

The machines that perform the operation of reduction, of one or both ends of the body of a container, are called entalladoras (in English “die necker machine”). There are three types: 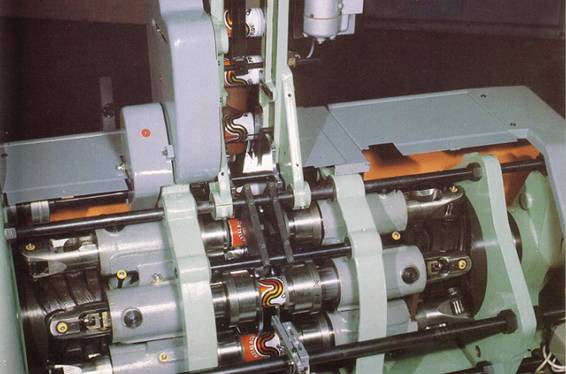 The way to actuate the tooling in a conventional cutter (except Lanico equipment), is to achieve the reduction of the end of the diameter of the body of the container, introducing the same pressure inside a buffer (diameter T), bound and guided externally by a ring, which has an inside diameter (A) equal to the outside of the reduced end to be obtained. See figure # 7 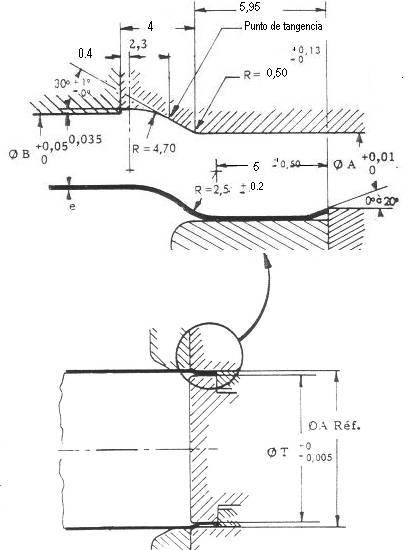 The adjustment of the operation must be done in such a way that the edge of the body should be slightly bent towards the outside. This curved will be about 0.2 mm and its purpose is to facilitate the subsequent flanging of the body.

In photo no. 8 several bodies for beverage containers are seen, three-piece, diameter 65, electrically welded, notched at both ends and flanged. It is a clear example of everything said before. 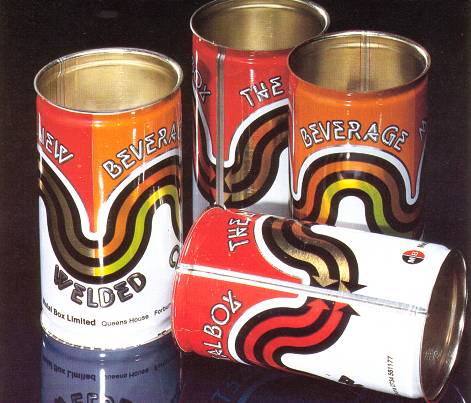 In this work we have not wanted to treat the packaging of beverages, made with the technique DWI (stuffed-stretched-ironing), it is a separate chapter, which deserves to be described independently.