In the last decades of the last century, a new technique for the manufacture of sausage packaging was developed, which is known as DRD. It was one of the most important contributions of the sector since it began its journey two centuries ago.

The idea was not new, for a long time they used the sausages that received the name of “two pieces” because they were formed by two elements instead of three, the lid on one side and the bottom and body in one piece for another. The body was obtained by simple stuffing in long stroke presses and greater power than those used for caps. The thickness of the walls of the body and of the bottom was practically the same since the metal undergoing the drawing operation stretched very little. The height of the container obtained was small because the value of half the diameter of the container could not be exceeded; if it increased, the breakage of the material originated. This restriction had its origin in three factors, limitation of the properties of the tinplate existing in the market (embutibilidad), type of available equipment and design of (traditional) tools. 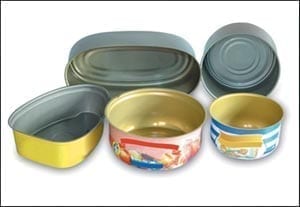 But, as we have already indicated, since the seventies of the last century, new technologies have emerged that are able to respond to these three limitations, creating a new generation of “two-piece” packaging. This response was achieved through the joint work of steel mills, equipment and tooling manufacturers and packaging manufacturers. With this new generation of packaging the manufacturing scheme is significantly simplified, – compared to the traditional “three-piece” packaging – by eliminating the union operations of the ends of the body’s development for the formation of the same and of closed of the fund, since this does not exist as an independent piece.

The system completely modifies the structure of the classic metal container (three pieces), passing the body and the bottom to be a unique element, which brings some significant advantages:

– Reduces the risk of leakage in the container or microbiological contamination of its contents through micro-leaks.

– It facilitates the closing operation of the lid by eliminating the double thickness in the seam area, which allows an increase in the working speed.

– It allows the total lithography of the surface, giving a greater commercial appeal.

– Eliminates the risk of microbiological contamination when the closure disappears.

– Simplify manufacturing by suppressing an operation.

On the other hand, and as a most remarkable fact, it is necessary to highlight the material savings that this packaging manufacturing system means since, although there is an important “cut” of coils, the stretch obtained from the material more than compensates for the same.

The difference between the classic embossing technique applied to the production of shallow containers – previously mentioned – with the modern technique of “embossing-re-embedding” (DRD) is that the latter allows successive embossing operations. In this way containers with a greater height / diameter ratio are obtained. The process is as follows:

1st.- Starting from the metal normally supplied in coils, flat discs are cut, which are fed to the next operation.

2º.- A first cup-shaped filling with a larger diameter and a lower height than the container to be obtained is made.

3º.- The cup is reembutida once or twice. In each of them the diameter is reduced and the height is increased until reaching the desired dimension.

4th.- The bottom of the container is stamped.

5º.- The excess material is trimmed.

6º.- The container is completed by cordoning it, blinking it, etc. 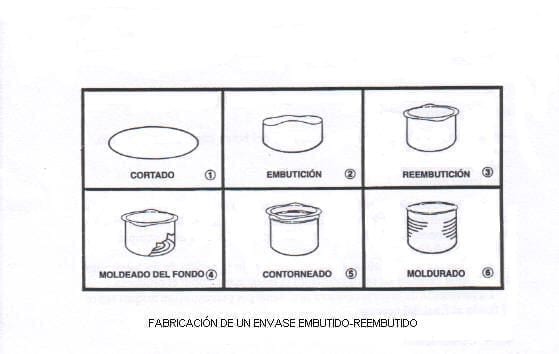 Both the press and the tooling are of several operations. This type of containers can support both the vacuum and the internal overpressure as the walls maintain a thickness close to the initial and are designed for foods that need sterilization process.

Unlike DWI containers, DRD-type ones are not usually presented lithographed on the market, using a paper label. To ensure the position of the same and facilitate the rolling of the same during handling usually present a lateral cord near its base. This more conventional presentation is easily accepted by the consumer since normally its destination is the vegetable preserve where the use of a label is traditional.

As a raw material, tinplate, TFS and aluminum are used depending on their prices and consumption habits in the market, making it difficult to transform a line that has been designed to work with tinplate to use aluminum and also its inverse Especially the transport systems that for the first and second cases are usually magnetic while for the third they can be by air and vacuum. In general in North America, aluminum is the most important and in Europe consumption is distributed, with a clear tendency towards TFS.

The technology in both cases originated in North America but soon spread throughout the world. As the investments to be made are very high, its start-up is limited to large multinational companies.