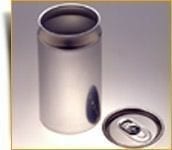 Developed in the last third of the 20th century, two-piece containers of this type are undoubtedly the greatest advance in the technology of metal packaging, since its introduction as a container for food packaging.

Two techniques have been developed for the manufacture of these containers: The “inlay-stretched-ironed” (DWI: Drawn & wall-ironed), and the “embutido-reembutido” (DRR: Drawn & Redrawn). Basically in both processes part of a metal disk, from which is achieved, by embedding, a cylindrical shape and, in a sequence of operations, the degree of embossment is increased to achieve the desired format. In this work we will only focus on the first type that has managed to be the “king” package at the moment when it is widely used to contain carbonated beverages and beers.

The process of manufacture of the packaging “drawn, drawn and ironed” (DWI) is already in the actuality, very generalized and incorporated to the industrial uses, being able to apply for containers so much of tinplate as of aluminum. In this case the phases of the process are the following:

1º.- The first operation is the simple stuffing of a “cup” – always starting from a material in coil – which has a diameter greater than that of the final container and a rather low height. It is made in a vertical press multipunzón of high tonnage.

2º.- In the next one the glass is subjected to a series of stretched and pressed, until reaching the final diameter. To do this, it is passed through a series of rings pushed by an internal mandrel. In this way, a very thin wall is obtained with an optimum use of the material, since the thickness in said wall is reduced to one third of the starting one. For example, if the coil is 0.27 mm, it may reach 0.08 mm. In the middle of the wall once the stretch is finished.

So that the stretching can be done without breaking the material it is necessary to carry out the same in a lubricant bath At the end of the route of this phase of the process the bottom is configured – called a dome – which on the contrary practically maintains the initial thickness of the material . All this sequence is done in a team that resembles a horizontal press in an oil bath and is called “formadora”.

3º.- This large stretch generates a very irregular edge of the container, requiring a subsequent trimming operation to equalize it and eliminate the excess material.

4º.- The presence of residual lubricant in the cans from the previous operations requires washing with detergent, rinsing and subsequent drying in the oven.

5º.- In the case of DWI containers once they have been formed, cut, washed and baked, a white exterior varnish is applied by means of a conventional varnish roller – white offset ink can also be applied. The bodies of the containers rotate about 2.6 laps on their axis at speeds exceeding 1500 containers per minute. The dry film weight for a typical white primer is approximately 10 g / m2 depending on the type of subsequent decoration. The oven varnish is then dried for a time not exceeding 60 seconds and at a temperature close to 200ºC.

6º.- After leaving the oven, the containers are transported to the decorating station, where the different colors are applied by dry offset, passing again through an ink drying oven.

7º.- The displacement of the containers at high speeds by the transportation systems would generate abrasions in its base – on which it rests on these routes – that over time would be transformed into metal oxidations. That is why you have to protect the bottom of them with an adequate product.

8º.- After these operations and before the internal varnishing, the neck of the container is reduced and its tab for the future closure is formed. This reduced allows to use a lid of much smaller diameter than the one of the can with the consequent saving that it supposes, keeping in mind the enormous volumes of manufacture that move in this market.

9º.- It is necessary to check the tightness of the cans to prevent leaks. For this, they are passed through a device that detects these possible leaks by light, automatically rejecting the defective boats.

10º.- DWI containers require internal protection to eliminate metal exposure by coating them with two or more layers of sanitary varnish of complex application. Given the severe process of forming them, only the varnishing operation – and the previous decoration – is possible after the wall has been stretched and its subsequent cutting of the excess material. The requirement of quality of the multinational beverages and the need to support a reduction in diameter in its neck after decorating the container, has transformed these operations into a highly specialized field The application of an interior coating is carried out by spraying the varnish – by spray – normally in two passes. In Europe solvent based systems based on polyester resin, with excellent hardness, still seem to be good solutions to be used in DWI packaging coatings. Systems formulated with acrylic resins are also sometimes used. However, water systems based on acrylics are having an increasingly widespread use. The main reason is essentially to observe compliance with current environmental legislation, both in terms of industrial working conditions and the control of emissions.

11º.- Each layer or interior varnish pass must be cured in an oven (IBO) at a temperature of about 210º C, which is decisive to ensure a good quality of both the interior and exterior finish.

12º.- Finally the cans pass to an automatic palletizer where they are packed.

Given the high cost of DWI lines, in order to achieve an adequate profitability, it is necessary to work with types of packaging and large consumption formats. In this sense, these containers find their greatest application for the canning of beers and carbonated beverages.

For these products the two-piece package presents the best conditions, since:

– The internal pressure of the carbonated products allows to work with very thin walls (0.10 mm and smaller) without mechanical problems, since the pressure confers stability to the container.

On the contrary, the thinness of the body walls prevents its use for the packaging of products that require vacuum and / or sterilization treatments (preserves, in general), since the walls are deformed by the action of the vacuum in the most of the cases. The problem could be avoided by proceeding to the sealing (or grooving) of the wall of the container or by modifying the technology of packaging with injection of inert gas in the filling and closing of the same. This technology has not been developed because it would still have serious limitations, both flexibility of the installation and benefits of the resulting boat. Undoubtedly, better alternative would be the use of cans obtained by deep drawing.

As a raw material both tin and aluminum are used depending on the prices of the same and the consumption habits in the market, being difficult to transform a line that has been designed to work with tinplate to use aluminum and also its inverse, mainly by transportation systems that are specific to each type of material. In general in North America aluminum is the most important and in Europe consumption is distributed. The technology in both cases originated in North America but soon spread throughout the world. As we have already said, since the investments to be made are very high, its start-up is limited to large multinational companies.

COMPARISON BETWEEN CONTAINERS 2 AND 3 PIECES