This article describes an automatic machine for inserting cans of different diameters, one inside the other, in order to reduce their volume to extend transport distances.

The machine we describe is valid for coupling cans of the following dimensions:

It can be fed, either directly from the manufacturing line of the cans, or from semi-automatic palletizers, equipped with a subsequent system of lifting and falling by gravity of the cans to the machine. Once the cans are assembled, they can be packed again in a palletizer attached to the outlet of the insert.

There have been cases of having to transport empty cans to a point very distant geographically. This can happen in very large countries, between different countries or even more between different continents. For example, it is the case of moving boats manufactured in Europe to be filled in Africa or South America. The cost of transport can make the operation much more expensive to the point of making it unviable.

An alternative to reduce this cost is drastically reduce the volume of merchandise. In this idea, a cans manufacturer developed in his day, a team that allows to insert some boats inside others. In particular, the project was started with cans of diameters 52, 65 and 73 in the dimensions indicated above. The solution can be applied for other diameters, or even increasing the number of cans inserted, for example the diameter 99 could be added to the three already mentioned.

The economy in volume, in the case of the three mentioned cans once inserted, is approximately 53%, compared with that of the three sizes separately.

To develop the manual insertion operation is prohibitive, since it is done in countries with a high labor cost, that is why it is necessary to train it in an automatic way, for which an inserting equipment was developed that we now describe. Once in destination, on the contrary, the recipient countries usually have a cheap workforce, which allows the operation to be carried out manually, since even closing rates are low.

DESCRIPTION OF THE MACHINE

A schematic drawing of the equipment is indicated in figure 1. It is a rotating automatic machine with a very simple structure. With a ½ HP motor-reducer and a suitable chain drive, a vertical shaft is given at 30 rpm. On it are mounted three stars. 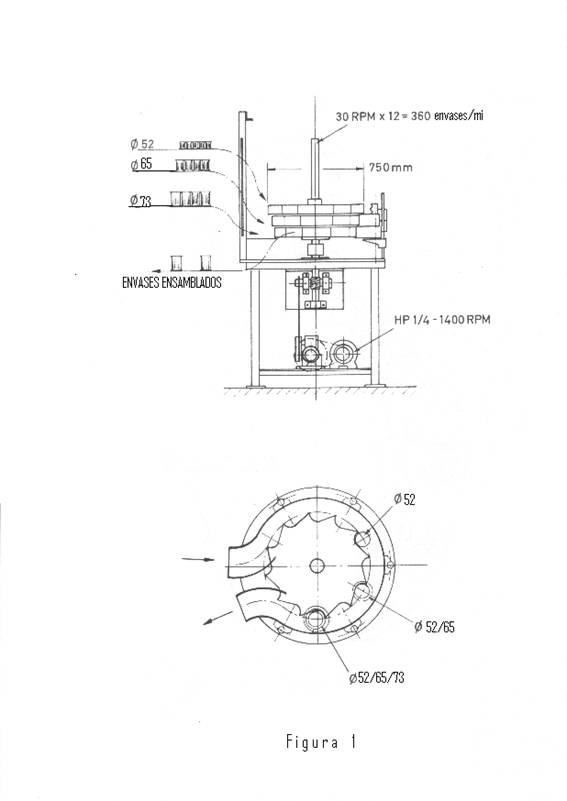 At this speed of 30 rpm the machine inserts 1080 cans / ml. The machine consists of: Three concentric stars, each with 12 stations. Its external diameter is 750 mm. Each of them has its 12 stations adjusted to a container diameter.

The three stars are located at different levels, superimposed, exactly coinciding with the center axis line of each station. At the same time, cans of different diameters arrive through gravity drops simultaneously. The three levels of cans are placed one on top of the other, with the smallest in the upper part and the largest in the lower part. See figure 2. 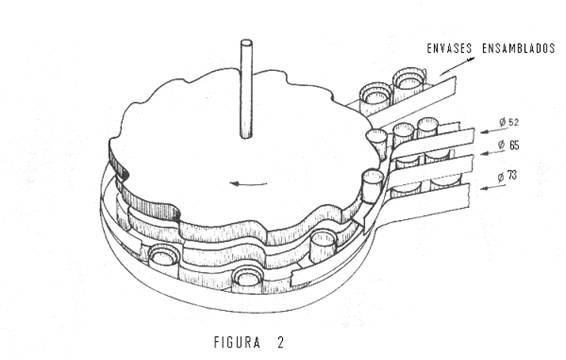 The three layers of cans move, dragged by the stars, on fixed and flat guides that close each star by its lower part. After rotating the stars an arc of approximately 100 °, the upper guide is interrupted and the smaller canister falls into the container located in the second lower level. These two boats already coupled, rotated dragged by the second star – central star – an arc of about 120 º. At that point the second fixed guide is interrupted, falling into the third container. The set of three cans continue to rotate approximately another 100º and in this place they are extracted from the machine by means of curved guides, see figure 2 again, and deposited in an evacuation conveyor.

This conveyor can drive the packages to a packing station, palletizer or cardboard box filling machine.

The price of the machine is low and its maintenance practically irrelevant. You can work with it, feeding it from three manufacturing lines, although it is easier and safer to do it from three semi-automatic depalletizers, starting from a previous production, or by resorting to an intermediate solution. In figure 3 a general scheme of an installation of this type is drawn.

In the place of destination, for extraction of the cans, a semi-automatic fork can be used, which carries a suction cup on each tooth, which grips the bottom of each container by its interior.

In the transport of cans, both by road and by boat, there are no serious problems of damage to the interior varnish by contacting the edge of the tabs of the smaller container, although there are slight circular marks due to this action.

It is possible to apply this type of machine with different combinations of two, three or four floors, for other diameters, depending on the needs