CEMENTS FOR SIDE SEAMS 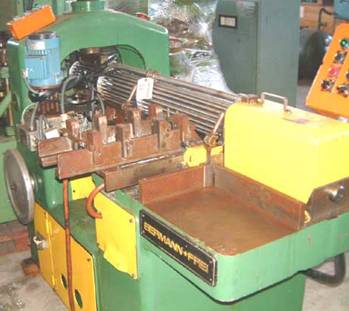 Before appearing on the market the electrically welded seam in the bodies of the containers, the normal system to realize the same, was based on performing a snap or engargolado of both lateral ends of the body, and then apply a tin-lead alloy . This method disappeared from the market due to the toxicity that lead could contribute to food.

However, the way of sewing by means of a seaming connection was not totally eliminated. Even today it remains in some facilities for the manufacture of special containers, they take advantage of the old formers (bodymaker), in which the tightness of the seam is achieved by the contribution of a special cement, which is applied inside the union. See figure nº 1. 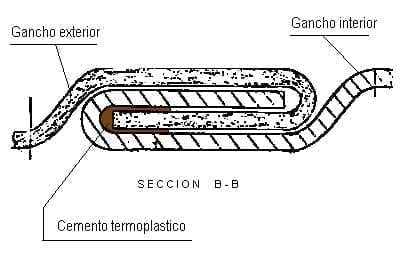 Figure nº 1: Placement of cement in a stitched seam

This system has its advantages and disadvantages as we will see later, but it is still a completely valid procedure for certain applications.

Although these cements of the lateral seams are part of the family of organic sealing materials, their characteristics are somewhat different from those of the compounds or seals for closures of lids and bottoms. Their application and use are also different, however, they work satisfactorily to produce a sealed joint under certain conditions.

These cements are also referred to by the name of thermoplastic glues.

A cement or glue for side seam is an organic adhesive material, used to seal the side seams of the containers. Basically they are structurally polyamides or organosols obtained from thermoplastic resins. They usually replace the electric welding used in these seams when the containers are intended to contain a product not processed in heat.

FUNCTION OF CEMENTS FOR SIDE SEAMS

This use as a sealant and adherent can be applied to packaging bodies not only made with tinplate, but also works very well when the material is TFS or aluminum. This is a significant advantage, since the electric welding technique is only applicable on tinplate. With this product it is even possible to use black plate, assuming there is no risk of oxidation.

The term “thermoplastic cement for side seam” refers to a solid material, which softens when heated – hence its designation of thermoplastic -. Initially it started to be manufactured with materials of the glycerin-glue type, but the results were not very satisfactory, so they were replaced by a new generation based on resins and plastisols with very good success. Currently, they are formulated from thermoplastic resins. Its main features are:

The cement in solid state, in the form of bars, is heated in a tank equipped with electrical resistances to melt it in a step prior to its application. Then it is pumped through conduits, also equipped with electrical resistances, which increase the temperature of the liquid cement by 30ºC, passing through them, they are heat-insulated to maintain the temperature, until it is applied to the inner part of the inner body hook. , just at the moment before sewing the seam. The application is made by means of a nozzle that projects a thin jet of this molten compound in the appropriate area. Once the body is formed and latched, it is expelled from the forming drum, passing – transported by means of a chain or belt – in front of a burner that momentarily heats the side seam to allow the cement that has already cooled, and perhaps solidified, it softens again by recasting, and thus flows and adjusts to the configuration of the side seam.

When the cement cools it becomes harder and brittle. To reduce its fragility plasticizers can be added in its formulation.

The flat templates of the bodies destined to this type of containers, prior to the application of the cement and formation of the seam, are highlighted the four corners, with different angle of inclination, to eliminate the presence of four thicknesses of material in the area of the extremes. This facilitates the formation of the body hook in the closing of the lid and bottom. See figure 2

Figure nº 2: Bending of the four corners of body template

The use of thermoplastic cements presents a series of advantages and also some disadvantages that must be taken into account.

–          The possibility of being used in containers made with different materials such as TFS or aluminum as well as tin, as we have already said.

–          It is possible to use a lithographic design of the body without reserves, that is, it can be completely printed on the outside and completely varnished inside, since for the application of cement it is not necessary to reserve the area of ​​application of the same.

–          The energy consumption with this technique is much lower than that required in a welded seam.

As disadvantages we will point out:

– A greater consumption of tinplate, necessary to make the seaming. This increase is the one area of ​​a rectangle about 6 mm in base by the height of the body of the container.

– Limitation of use. It is only applicable for containers that are not going to receive a thermal sterilization process. A container with cemented seam should not be exposed to a temperature above 80 ° C.

APPLICATIONS OF CEMENTS FOR SIDE SEAMS

The thermoplastic cement can be used in containers that are intended to contain:

It must not be used to contain solvents and pure diluents 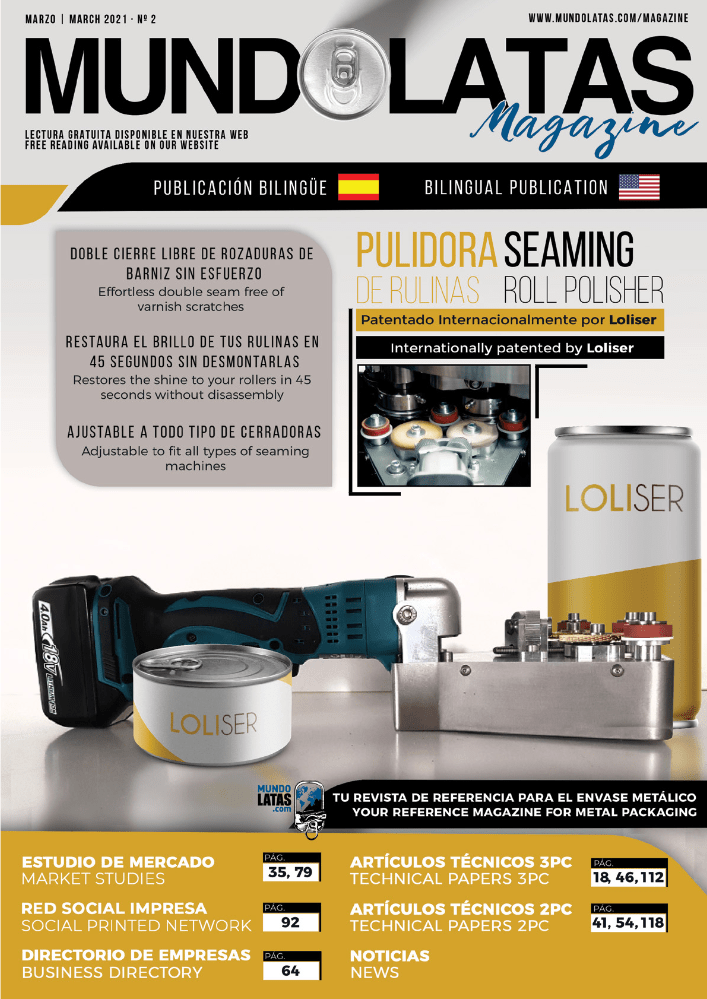