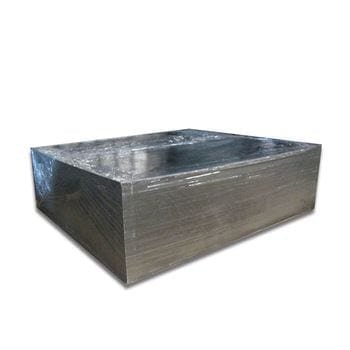 The name of TFS comes from the English words “TIN FREE STEEL”, which can be translated as “tin-free steel”. It is also referred to as “chrome plate”. It had its origin several decades ago as a response of the steel mills to the risk posed by Tinplate the increase in the price of tin and the danger of depletion of sources of supply of this metal. The TFS soon attracted growing interest from manufacturers as well as from users of metal packaging as it is a material capable of replacing tinplate in many uses by presenting similar properties.

The TSF has a basic support identical to tin: steel. Which can be obtained by simple or double reduction. However, the protection thereof is ensured not by a layer of tin applied by electroplating and a passivation film – as in tinplate – but by a mixed coating composed of chromium and chromium oxide.

Its mechanical properties are similar to those of tinplate, since the one who basically defines them is the steel base and as we have said, it is common in both although its coefficient of friction is greater than that of tinplate, causing an abrasion – wear -Of tools greater than her, but once varnished this action is diminished.

The TFS presents a different visual aspect than the tinplate, tending to a bluish gray color. Which allows to obtain certain special effects with the application of transparent inks or varnishes. It is a material that must be handled with care. It is quite sensitive to scratching and can not be touched with hands since the trace is marked and its adherence to varnishes is reduced in this area, so it must be handled with gloves. Therefore, it must always be used with an organic coating on both sides. One of the characteristics of the TFS is to offer a perfect adhesion to this type of coatings that increases the resistance to corrosion. Today the market offers a wide range of varnishes suitable for this use.

This product had its origin in Japan around the year 1961. The first manufacturer was Toyo Kohan with the name of “Hi-top”, soon other Japanese steel mills joined the production giving it different names such as “Can Super”. From 1965, the steel mills of the United States and Europe were manufactured under license.

In general, they use mixed lines for their manufacture, which can pass in a short time from one tinning process to another chromium and vice versa. In other words, these are generally tinplate manufacturing lines complemented with the necessary elements to produce TFS as well. This is facilitated because both the head of the line – which works with the same steel base – as the tail – control, cutting and packaging – are common.

The chromium coating, chromium oxide is achieved by electrochemical deposition starting from chromic acid solutions and although the thickness of the coating layer is much lower than that corresponding to the tinning of a tin E.2,8, however the coating is highly uniform and the iron metal area exposed in the pores in less than in said tinplate.

The TFS, after an appropriate varnishing, is a material that ensures a protection compatible with a large number of low acid food products.

–          Bodies of containers type “3 pieces”: It does not allow its welding by a conventional electrical system by points. Therefore, its use is reduced in this case to bodies with glued seams with resin or thermoplastic cement applied in industrial containers.

–          Bodies of packaging type “2 pieces”: It has a good application for all types of sausage packaging. Perhaps better than tinplate, because it can be based on an equivalent steel base and also has an excellent adhesion to varnishes subjected to the embossing effort.

–          Funds: It is a good alternative. It can be used for a wide range of products as long as they are not very aggressive.

In general, a well-varnished TFS can have a service equivalent to a Tin plate E 2,8.