FACTORS AFFECTING VARNISHING OF THE TIN 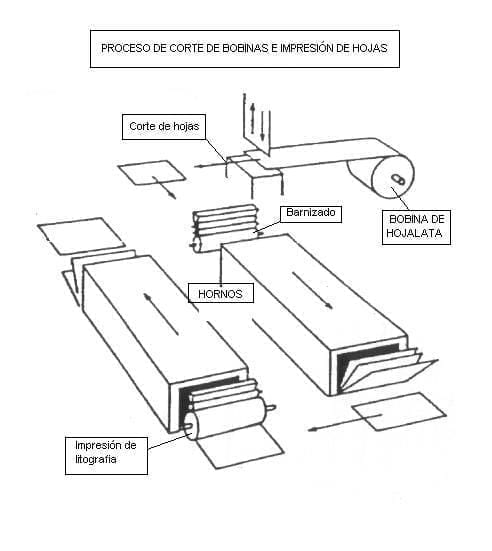 The defects produced in the tinplate varnishing (faults, “eyes”, lack of adhesion …), may be due to, among other things:

– A) It is very important to keep the surface of the leaves perfectly clean to avoid the presence of dust particles. For this, the good condition of the packaging is fundamental, being advisable to cover well the packages that have been started before or are in the process of being manufactured and whose original packaging has already been eliminated. It is usual to cover them with at least one leaf “macula” at least of its same measures.

– B) In the tinplate the dioctyl sebacate is commonly used as a lubricant. Its possible alteration by oxidation, aging or other chemical changes that may occur during storage, entail modifications in the adherence of the varnish on tinplate. Imperfect cleaning of the surface of the tin plate in the steel industry can cause problems in the coating operations, since a small drop of oil on its surface usually produces a discontinuity in the coating film of the varnish, even a particle of the cleaning agent normally it absorbs oil and generates similar effects, although it is distinguished by the fact that after varnishing, the uncoated drop will normally show a small black particle at its center. This drop can be due to a low temperature in the cleaning bath, causing insufficient drying and the aggregation of cleaning materials. These defects can also be caused by deficiencies in the compressed air used in the leaf feeder blowers in the coating line (moisture and oil in the network).

– C) The faults produced in the passivation varnish-film interface can be due to an excess of passivation, with little or no free tin, which interferes and harms the curing speed of the varnish. On the other hand, if the passivation is very weak, the dissolution of the free tin or tin oxide between the varnish and the base metal could occur, damaging the adhesion.

– D) Apart from the influence of the chemical conditions of the surface, the surface roughness and the thickness of the tin coating can have an influence on the varnishing results. Excessive roughness is capable of causing an irregular passivation, producing an uneven thickness in the varnishing. Very thin coating layers can lead to adhesion failures, especially in those places that suffer intense mechanical deformation.

– E) The varnishes have an expiration date that must be respected. From the same its characteristics can be altered and generate problems in its application that result in a lack of adherence. The storage conditions must also be taken care of, especially the temperature, some types of them require a controlled temperature. On the other hand, the solvents used in the varnish can affect its adhesion or wet on the tinplate, because the characteristics and quantity of them can act on the film of the lubrication oil, depending also its influence of the singularities of the tinplate passivation film.

– F) When the packages of virgin tin are stored in cold stores, the low temperature of the leaves negatively affects the adherence of the varnish. This is solved by endowing said heating warehouses or simply transporting the material to be varnished sufficiently in advance to the application area where the heat coming from the drying ovens will temper the leaves.

This enumeration of factors is not complete, others may occur other than tin and varnishes, such as: bad adjustment of the drying ovens, dirt in the containers, etc.

The difficulties listed in the adhesion can be avoided in general by means of a preliminary heating of the tinplate, either by baking it or by exposure to the flame (“anti-flecking”). However, this difficulty can not always be avoided by said procedures, since if the passivation is insufficient, this preliminary heating of the tinplate can cause an increase in the tin oxide, damaging the adhesion of the varnish.

The adhesion failures of the varnish can be evidenced by:

–          Breaking and lifting it during the mechanical deformation processes of the tinplate, for example: folding, folding, stuffing …

–          Removal and separation of the varnish during the heating processes.

It is therefore necessary to establish adhesion tests continuously in any coating process.

THE "TWIST COVER": A LITTLE HISTORY
QA IN THE LINES OF CUTTING COILS
AEROSOL CUPS
RECEPTION OF CANS IN A FILLING PLANT