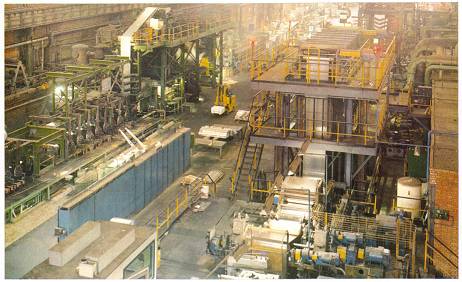 Brief description of the different phases of tinplate manufacture, its structure and its properties.

With this work we intend to give some very general notions about tinplate. Being the basic raw material in the metal sector, it is necessary to present even very briefly its properties, so that the uninitiated can have a minimum knowledge that will help them get better into this Web page, or better interpret any writing related to that industry.

The tin plate is basically a sheet of steel coated with tin on both sides. Its beginnings go back almost 700 years ago. It has therefore a very long history, although it has been during the twentieth century when its manufacturing technique has evolved in depth.
.

It is the body of the tin plate and the one that determines its characteristics. The selection of the type of steel with which the tin is manufactured is defined by the end use to which it is intended. Several basic types of steel are used for its manufacture, such as MR, MC or L. They are steels with a quantity of carbon between 0.05 to 0.12% and manganese from 0.30 to 0.6%. Sulfur should not exceed 0.05%. They can also contain small amounts of phosphorus, silicon … Later on we will summarize in hard form the hardness of this steel according to its use.

In obtaining it, the following phases are distinguished:

A) Plate making. Follow the common procedure for obtaining a steel in a steel industry. There are two options: Process by continuous casting or in molds. Figure 1 shows a general scheme of the process until the completion of the plate.

Figure No. 1: Manufacture of steel plates

In the case of ingot manufacture, once the steel has been melted and the ingots have been formed, they are laminated to become slabs called “slab”. This operation is carried out in reversible rolling mills. Some types also have side rollers that simultaneously work the four faces of the ingot, eliminating the operation of turning on its axis during this stage.

The final product of this operation, the plate or “slab”, has a thickness of 125 to 230 mm, the approximate width of the tin that is finally to be obtained and a length that depends on the size of the ingot.

The continuous casting process eliminates these different stages, developing the entire process in an uninterrupted manner.

B) Hot rolled. It is the next step. Normally there is an intermediate stage, which consists of cooling and storing the plates, making a selection process, a preparation of the surface (steep) and an overheating of the plate at the convenient temperature for the rolling. In scheme number 2, the different stages of this process are indicated.

The hot rolling mill reduces the plate to a continuous band of about 2 mm thick. This train normally consists of two sections, one roughing and one finishing. It can be continuous or reversible, depending on the capacity of the installation, etc.

At the end of this process, the material is finished in the form of coils.

C) Cold rolled. These coils produced must be pickled and lubricated before proceeding to cold rolling. This operation is usually carried out in a succession of tanks containing hot dilute sulfuric acid. Then they are washed, dried and lubricated with palm oil or other suitable lubricant for cold rolling. The pickling line is usually provided with a circular cutter that cuts the edges, thus ensuring that these are suitable for cold reduction or rolling, thus also fixing the maximum width of the sheet that will be obtained. Figure 3 shows a diagram of this phase. 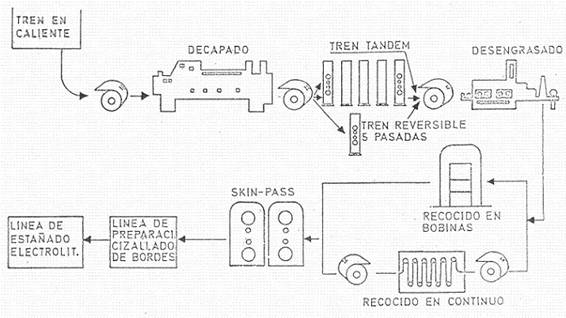 Figure nº 3: Cold rolled, annealed and skin-pass of the steel base

Cold rolling can be done in continuous (tandem) or reversible trains. During this reduction lubricants and coolants are used, and the resulting thickness is very close to the desired end in the case of reduced simple tinplate.

D) Annealing. The coil obtained is made of a very hard material and subject to high stresses and needs an adequate treatment to give it the necessary machinability. This treatment is called annealing and can be done continuously or in hood ovens. See diagram no. 3. In both cases it is essential to remove the residues of the previously used lubricants and coolants, the method used for this being, consistent with the type of annealing that is done, electrolytic media are normally used.


E) Skin-pass. Then comes the operation of tempering-surface treatment or finishing, called “skin-pas” or “temper rolling”. It is done by means of a reduction or lamination, without lubricant and very light, which usually does not exceed 2% in thickness. See diagram nº 3.


This stage gives a smooth surface, improves the shape and induces in the material the necessary ductility. In the case of reduced double tinplate the tempering operation is replaced by a second reduction of gauge or second laminate of approximately 33%, this time using surface lubricant.

It is common practice to prepare the coils prior to the tinning operation. It consists mainly of cutting the edges and removing the sections of low quality or caliber out of specifications.

Currently the system used to deposit a thin layer of tin is electrolytic. Formerly, another one was used by immersion in molten tin-coke tin baths – which due to its high consumption of tin was obsolete.

There are several ways to proceed in the manufacture of electrolytic tinplate. Basically it is to pass the coil of black sheet already prepared, through a baso – electrolyte – tin salts that incorporates several additives. The tin is taken from electrodes immersed in the bathroom.

By simplifying the process a lot, the following stages can be distinguished: See figure 4.

– Unwinding and preparation of the black sheet coils: Feed continuously to the line, cutting the beginning and end of each coil and soldering them. It has a band storage system that allows to accumulate a certain amount of it, which feeds the line while the change and splicing of the coil is made.

– Degreasing: Removes residual elements on the surface of the belt: remains of lubricants, coolants, etc. It is achieved by means of chemical baths.

– Washing: Cleans the remains of the degreasing operation by means of jets of water and / or steam.


– Pickling: Removes the iron oxide adhering to both sides of the coil and leaves the surface ready to receive the tin.


– Tin: It applies tin on both sides, there are several procedures of application, acid process and alkaline or basic process, the latter in turn has two options, horizontal halogen lines and vertical alkaline lines. The most common are those that use the acid process. Electrolytes are the most delicate part.

– Remelting tin: Its purpose is to give a bright finish to the tin, since the simple elect-deposition of the tin produces a micro-rough surface with a matt appearance. In this operation an iron-tin alloy layer is produced, intermediate between the base steel and the superficial tin on each face, which increases the resistance of the tinplate to corrosive elements.


– Passivation: Fundamentally consists of forming a layer of chromic oxide and tin. The methods used are several, chemical or electro-chemical, designed each of them to obtain special characteristics. This protective layer helps prevent oxidation, not only during manufacturing, but also in successive operations, such as varnishing. It has a decisive importance in the correct adhesion of varnishes to tinplate. The different passivation treatments produce different forms of attack or staining when the tin is subject to contact with corrosive products or with sulfur compounds.


– Oil: In it a lubricant is applied to the surface of the tinplate. This lubricant has as its object, not so much to protect the tinplate itself, but the passivation and not to counteract the properties of this is very light, so the method of application most commonly used is by electro-deposition, although it can be done by sprinkling or immersion. The most used lubricant is dioctyl sebacate with a load of 0.005 gms / m2.


– Cutting and packing: The line ends with the manufacture of coils if the supply is in this way, or cutting in sheets. In this second case, the installation is more complex as it involves a process of selection and separation of defective material.


STRUCTURE OF THE TIN

The tin used in the protection of the steel base is of great purity, with more than 99.80% tin and less than 0.04% antimony, arsenic, bismuth copper and other metals.

The tinplate is not only formed by the steel base and two thin layers of tin on both sides. We have already talked about the formation of iron-tin alloy zones, passivation and oiling. Therefore, its final state is as shown in figure 5:

Figure nº 5: Section of the tinplate

Electrolytic tinplate can be produced in several finishes, although three are the most usual. A) Brilliant, which is the most common. B) Matte, or stone, consisting of tin base steel with a rough surface and then not remelting the tin and C) The same option B but remelting tin, which gives a shiny but not reflective finish.

A basic data for the selection of the right tinplate for each application is its hardness. It really is about the hardness of the base steel used in its manufacture. “Double reduced” tinplates have more hardness than “simple reduced” ones.

The hardness is evaluated on the HR 30T scale. In general, whiter tinplate is used for deep-drawn packaging or components subject to deep drawing. The hardest ones have their main application in the formation of bodies of cylindrical containers. The following table gives a general summary of the different types of tinplate classified by their hardness. 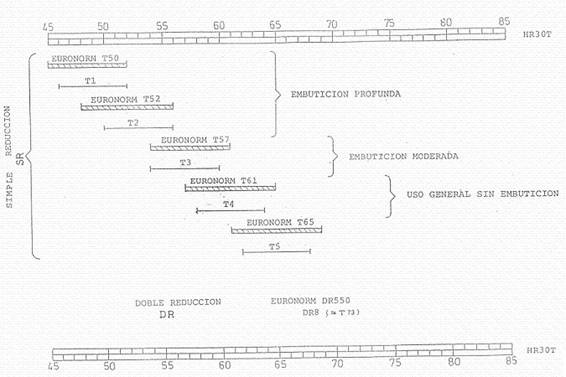 When the tin coating is not the same on both sides, the tin plate is called a differential. The tin load is measured in grams / m2. In the first column of table No. 7 the different most common tinplate combinations are reflected in the differential tinplate. Previously, other types of designations were used, such as those indicated in the second column.

To easily identify the different types of coating, separate parallel lines are marked at different measurements on one of their faces, usually on the one with the largest coating. For this, before tinning, these marks are made on the black plate, which the thinness of the tin layer allows to see below it. 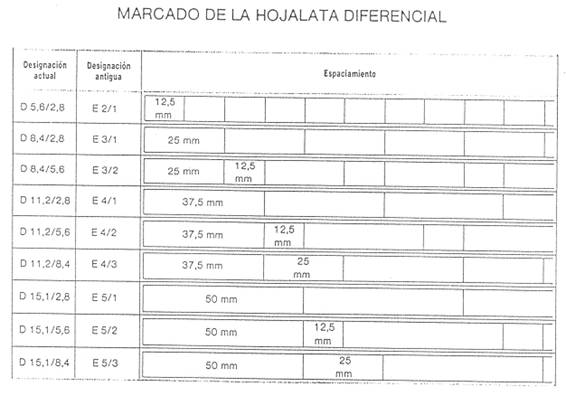 Figure No. 7: Marking of differential tinplate

ADVANTAGES OF THE TIN

Among others can be listed:

–  Presentation quality: Due to its metallic and glossy finish, it gives the packaging a pleasant presence.

– Suitability for the manufacture of boats: Its properties of hardness, elasticity, heat conductivity, etc. they make it the most appropriate material for this destination.

– Corrosion resistance: Tin protection makes it the cheapest metal material on the market that has high anticorrosive properties.

– Lightness: The extreme thinness that can present its walls, allows to obtain very light weight containers. This is a clear advantage in eliminating dead weight in handling and transport.

– Closed: Its mechanical properties facilitate the industrial process of seaming, allowing a perfect closure, with a technology available to any user.

–         Sterilization: Its excellent resistance to external or internal pressures, as well as its good heat conduction, facilitate any type of sterilization process.

–         Impermeability: It is a completely impermeable material, constituting a magnificent barrier to any type of external contamination.

DISTINCTIVE ELEMENTS OF THE METALS

TINPLATE: ALL THAT YOU NEED TO KNOW