PROPERTIES OF BASE STEEL 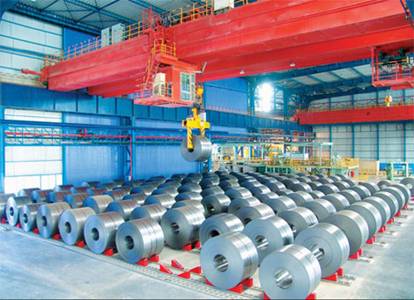 SUMMARY PROPERTIES OF BASE STEEL


Brief review of the characteristics of the base steel of tinplate, its definition, measurement and influences.

As is well known, tinplate is a material formed by a sheet of steel coated with tin on both sides. This steel is of a uniform thickness, and susceptible to oxidation without the protection of tin. Said steel sheet has certain characteristics that are the essentials of the tin, and influence the manufacture of the containers decisively. The main ones are:

Surface: Low box and Sita – Measurement of the surface area of ​​the sheet

Caliber – Thickness of the blade

In this work we will develop each of these factors

The degree of chemical refinement of the steel, ie its composition, was established in the manufacturing furnace thereof. For the manufacture of containers three types are used, identified as tinplate “L”, “MR”, and “MC”.

Tin plate type “L” has a low metalloid content (phosphorus). The type “MR” is of medium content, whose temper or hardness is acquired basically in the rolling operation. The “MC” type has a medium to high phosphorus content, superior to the other two types. The tempering of the latter is acquired basically by variations in the phosphorus content, although the rolling operation also influences. The most used of the three types with great difference is the “MR”.

The amounts of carbon, magnesium, silica and sulfur are very similar in the three types of tinplate. These elements, if they are in the limit of the maximum tolerances, can influence the characteristics of the steel and its operation. The presence of copper is lower in the “L” grade, resulting in greater resistance to corrosion. This type also has a lower proportion of phosphorus, also providing greater relative malleability, which allows a deep sausage. This high resistance to corrosion makes this type of tinplate very suitable for acid products such as fruits.

The increase in the amount of phosphorus increases its hardness during the process of rolling it, but on the contrary, as we have already indicated, it reduces its resistance to corrosion. Therefore, when you want to achieve average and sufficient values ​​of hardness and resistance to corrosion, the “MR” type is used, which is the most commonly used. In the article “HOJALATA”, published on this website, more details on the types of base steel are detailed.

In the market, several types of units are used to measure tinplate, which basically correspond to those of its base steel, since the influence of tinplate in the final dimensions is negligible. Basically there are three: American base box, European base box and sita. The base box is a unit of measurement of surface peculiar to the tinplate industry Two types of baseplate are used in the international tinplate trade: American and European

It is a unit based on the surface of 112 14 “x 20” sheets whose product – area – is 31,360 square inches (217.78 square feet) equivalent to 20.23 square meters. This system was derived from the quintal English commonly in use time of the initial development of tinplate in this country.

Tinplate measurement unit also by surface, equal to 100 m2. Its name derives from “System International Tinplate Area”. Equivalent to 4,943 American base boxes or 5,537 European base boxes .

At the lexicon level, lots of 112 or 100 sheets of any size and thickness are known as “packages”. The sheets are supplied in batches of several packages strapped on wooden platforms. Such a load is called a “package”. A package can be formed by 8, 10, 12, 15, or up to 20 packages.

The temper or relative hardness of the base steel of the tinplate, is the accumulated result of a series of factors or steps: the composition of the steel, the techniques of rolling, annealing and tempering (skin-pass).

When it comes to a tinplate of the reduced simple type, the Rockwell durometer is the standard equipment for determining the surface hardness, applied to check its temper. It is a universal equipment that uses different parts of change depending on the material to be measured, which makes it suitable for testing a large number of steel types and different thicknesses.

For the reduced double tinplate this device is inadequate, due to the great thinness and high hardness of it. In this case, an equipment for tensile tests is used, determining its elastic limit as a data comparable to the determination of its hardness.

The hardness of the tinplate is designated by letters followed by a number. This nomination varies if it is a simple reduced or reduced double type tinplate.

For the case of reduced simple, the letter “T” is used followed by a two-digit number. The letter comes from the word “temple”, and the figures correspond to the average value of the hardness field, measured on the Rockwell HR 30 T scale, which includes said value. The scale reaches the following values ​​and uses:

Code Range of Characteristics Examples of use

When it comes to reduced double tinplate, the European designation code consists of the letters “DR” (double reduced) and a figure of three digits that coincide with the elastic limit of the same expressed in N / mm2. The American code uses the same letters “DR” followed by a digit, corresponding to the first figure of the value of its elastic limit expressed in psi. An approximate hardness value can be given on the Rockwell HR 30T scale, but can not be taken as a reliable data. For the reduced double the following table of values ​​can be given:

The thickness of the tinplate is a parameter that presents no difficulty, it is determined with any valid procedure to check the thickness of a metallic laminated product, this can be by direct measurement or by weighing.

Previously, the concept of “base weight” was used to classify materials by thickness, based on the direct relationship between weight and thickness equal to the other measurements of the sheet. This basis weight was expressed in pounds per base box. This criterion is no longer used especially in Europe.

It is the most classic form of tin supply. It comes in the form of bundles of leaves to the measurements specified in the order.

To determine the dimensions of the sheet to be ordered or the width of the coil, a preliminary calculation must be carried out according to its final destination. If the same is for packaging bodies, it is necessary to determine by a geometric calculation the development of the same and make a composition with the number of elements that we want to obtain per sheet, from which the dimensions of the rectangle will be deducted. If its use is for covers, the distribution of the cuts of the discs on the blade is a function of the tool to be used, since it can be single, double or multiple punch. It will be enough to solve a simple geometric problem for its determination.

The dimensions of the sheet are calculated to give sufficient material at the edges. That is to say, at the exact theoretical value necessary to perform the planned operation, a cut or extra material will be added on all four sides of a value between 1 to 3 millimeters per side to obtain its final dimensions. The object of this cut is to give enough extra material to avoid the bad cut of one or more units to obtain from the blade. This value can be higher or lower depending on the precision and cutting quality of the shears used to cut the sheet.

These final dimensions are the theoretical measurements of the order. Steel mills have commonly supplied them with an over measure between 0 to 3 mm in length and width, in the sheets cut by them. This is done to compensate for possible misalignments or ripples (curved edges). These over-averages are known by the name of tolerances. The extra metal that limits the work area of ​​the sheet, and that is not used in the manufacture of bodies or covers, is destined for waste. It is common to take advantage of this measure, asking for dimensions that are somewhat smaller than the theoretical ones needed, which results in significant savings, as for example the reduction of 1 mm. in width in a large game is an interesting cost decrease.

Originally, all sheets were cut into specific rectangular measures in the steel industry. Although this system is still in force and still many small metal companies ask for the tinplate cut and prepared in bundles, it is normal to pass the orders to the steel industry in coils and proceed to its cutting at the metallographer’s house directly or resorting to a third party. This way you get a better use of the material.

The dimensions of the coil supplied by the steel industry, ie length and width are controlled by the following standards:

Width: Initially calculated based on its destination, the same as the width of a sheet. The width of each sheet from the cut coil should be measured with uncertainty of less than 0.5 mm. The width should be measured at the center of the sheet and perpendicular to the rolling direction, with the sheet resting on a flat surface. The average width must not be less than the requested width and must not exceed more than 3 mm.

DIRECTION OF THE GRAIN

The surface of the base steel sheet can have different degrees of smoothness or roughness, presenting various types of surface finish prior to the application of tin.

These degrees of finish depend on the characteristics of the surface of the rollers of the tempering train (temper rolling or skin-pass). The smooth and well-polished rollers will produce a similar surface on the sheet. A slight roughness of the same, made by means of sandblasting, generates a sheet with a certain degree of roughness. There are several degrees of finishing. In order not to be repetitive we will not enter into your classification, details about them can be seen in the “TIN” and “SUPERFICIAL TISSUE TREATMENT” already published on this website.

properties OF THE METAL CONTAINER