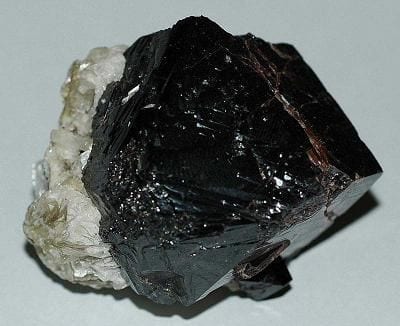 The metal packaging industry has tinplate as the most important raw material. This material although it is based on the characteristics of steel, however its most significant component is tin, metal that contributes to it its properties of resistance to corrosion, without which it would not be possible to use. So it’s good that we know a little about this metal.

Tin is a relatively rare metal in nature and expensive. The only mineral usable for its metallurgy is cassiterite or tin stone (SnO2), with 79% metal. In general this mineral is of color between dark brown and black, and has a matt adamantine luster. It is found in the form of hard, heavy crystals, difficult to fuse and almost unattackable by chemical agents in primary deposits, accompanied by pyrites, blendas, and tungsten and molybdenum minerals. It is also much purer in secondary deposits with a granular structure, in pebbles accompanied by garnets, spinels and other heavy minerals, forming alluvial tin.

The main deposits of primary ore were already practically exhausted from Erzgerbirge and Cornwall (United Kingdom), where the primitive peoples extracted tin to prepare bronze. In the Egyptian tombs articles made with this metal have been found. The reader in love with History, remember, the Phoenician excursions to the Casitérides, went to find the tin that the Greeks needed to make their bronze weapons, later with the advent of the Iron Age, the Pelasgians swept the Greek heroes of the map. Later it became a necessary element for art: statues monuments. With the extension of Christianity in Europe, the use and manufacture of bells was propitiated; the industrial revolution introduced bronzes and alloys for their special characteristics for work.

This mineral is currently abundant in Bolivia and East Asia, but the main production of the metal today comes from the alluvial mineral found in the Malay archipelago and in the islands of Oceania, particularly in Barka and Billiton.

To obtain metal, a primary preparation of the mineral, generally very poor, is required by means of a series of operations aimed at concentrating so that the treated ore contains at least 60% SnO2, eliminating foreign metals that would make it difficult to reduce it. they would favor the volatilization of the metal, make it brittle or modify its properties in an unfavorable way.

In the extraction of tin, the ore is first milled and washed to remove the impurities, and then calcined to oxidize iron and copper sulphides. After a second wash, the ore is reduced with carbon in a reverberatory furnace; the molten tin is collected at the bottom and molded into blocks known as tin ingots. In this form, the tin melts again at low temperatures; the impurities form an infusible mass. Tin can also be purified by electrolysis.

Tin is an Argentinian white metal, bright, has a crystalline structure, so being very soft, it produces a special screech when being bent, the so-called “tin cry”. It is soft flexible and resistant to corrosion in many media. It is so soft that it can be cut with a knife, so it is not very resistant; on the other hand, it is very malleable, especially in the water bath, to the point that tin sheets of 2 microns thick can be prepared with it by rolling. Its specific weight is 7.3 and melts at 232º C. It has great fluidity when melted and has a high boiling point.

At 200 ° C it is easily sprayed and at a temperature lower than 13 ° C it increases in volume and it is reduced to gray powder. The gray modification of tin, whose specific weight is 5.3, starts and advances slowly at a temperature lower than the point of transformation, which is 18º C, due to this disease of museums, – the tin plague – which attacks to the objects of tin preserved in cold places, it begins with the appearance of spots and spreads quickly, reducing the objects attacked to dust. At moderate temperatures, tin resists the aggressions of air, water and diluted acids well, hence its applications for the manufacture of containers; it dissolves with strong acids, in the presence of oxidants, in contact with nitric acid an insoluble powder of stannous meta acid is formed and with alkaline stannas; it burns in the air to form SnO2, which also forms superficially when the molten metal is heated.

Practically 60% of the metal obtained is consumed in the tinplate industry; the rest is used to make bronzes, soft solders and chemical compounds, added to glass to diminish its fragility, pewter alloy, and a small amount is in commerce as pure metal. In short, it is a very useful and scarce metal.

Tin can be combined with other chemicals to form compounds. Combinations with substances such as chlorine, sulfur, or oxygen are called inorganic tin compounds (for example, tin chloride, tin sulfide, and tin oxide). These are used in toothpaste, perfumes, soaps, food additives and dyes. Tin can also be combined with carbon to form organic tin compounds (for example, dibutyltin, tributyltin, and triphenyltin). These compounds are used to make plastics, food containers, plastic pipes, pesticides, paints and substances to repel animals.

The world market is regulated by very few multinational companies, which take great care to combine production with consumption, in order to maintain high prices in the market.

Nowadays the Devon and Cornwall breeding sites no longer have any entity, like those of the Iberian Peninsula. The hatcheries of the peninsula of Malacca, Indonesia, China, Bolivia and Brazil are mainly those that supply the world markets, and this so decisively that any fluctuation in their supplies can put in a bind the canning industry that uses the packaging of Tinplate as a continent. For this reason, in periods of scarcity or high price of tin, small tin recovery industries can be found in many parts of the globe from the tin cuts generated by the metal sector.

A LANCE IN FAVOR OF PACKAGING

THE AEROSOL CONTAINERS AND THE OZONE