CALCULATION OF STANDARD COST FROM A CONTAINER “THREE PIECES” 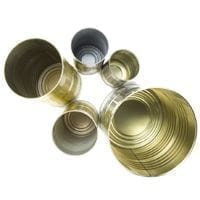 The calculation of the variable cost of a “three pieces” container – body, lid and bottom – is developed in the form of a table, starting from the consumptions necessary for its manufacture.

We continue here the work already published:  -Calculation of the standard cost of a cover

. If the reader has not elided the same, it is convenient to do so, because this new one is based on the previous one, and practically one is a continuation of the other.

The comments made in that on the need to know the variable cost of a lid, are also extensible to the container and we will not insist more about it, going directly to the development of the calculation.

At the end of this writing, figure 1 shows a summary, which summarizes all the operations to follow to perform this calculation. We will comment on the different parameters of the same in a very summarized way, since they were already glossed in the parallel case of the cost of a lid. The execution initially involves filling in the boxes of the table with a series of basic data, then perform with them a few operations that will lead us to the cost.

The calculation is made for a thousand units, since the unit cost is usually very small, and also the quantities of containers handled in the industry, are usually always multiples of a thousand.

Comments on the boxes:

they are the same as those indicated for the case of the covers, with the only exception of replacing the consumption of the compound with that of son of copper, interior varnish and external varnish of the side seam.

To calculate the consumption of copper wire, we start with the welding speed and number of containers per minute. From these data, the meters of yarn consumed per thousand containers are determined, which multiplied by their section and the density of copper will give us their weight.

To establish the amount of varnish used, it is better to act with real consumption averages during a certain period. In liquid – exterior varnishes – the cost of dilution and cleaning solvents must also be included.

Part of the packaging is often reused, such as pallets and cardboard separators. In this case you just have to take into account the demerit of them in each use, for this it is necessary to know the average number of cycles that each component is used. Other part such as plastic and strapping are for single use, and therefore its full value must be included in the cost

The lower box summarizes the previously obtained data and allows to determine the cost for one thousand units. For this we will fill first in the second column the quantities consumed of each component, including the standard cost of a cap and a previously calculated fund, in the third its price and in the fourth the product of both, which once added will give us the final value of the cost.

We omit more comments because they would be similar to those made for the calculation of the caps.

As already said, the cost obtained logically does not represent the total cost of the container. To arrive at the full cost of it, it would be necessary to incorporate a series of fixed costs, such as:

That is to say, what is understood as Fixed General Expenses of the factory. 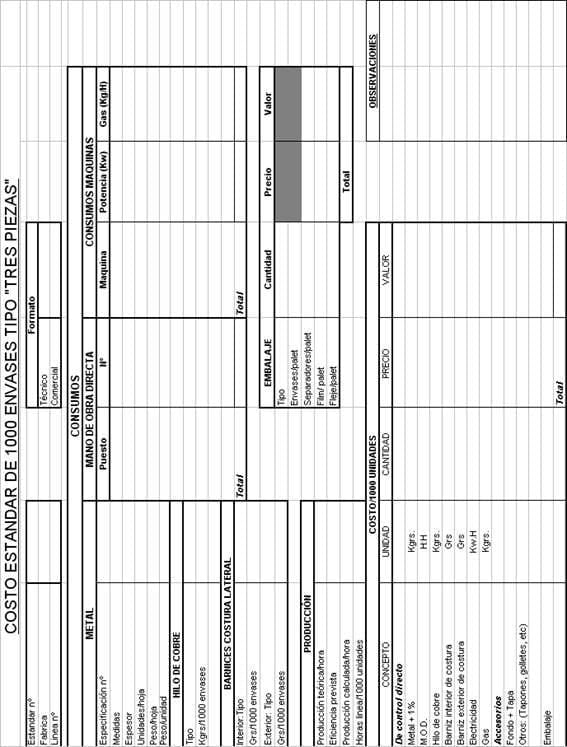 Figure No. 1: Standard calculation for the standard cost of 100 “three-piece ” containers