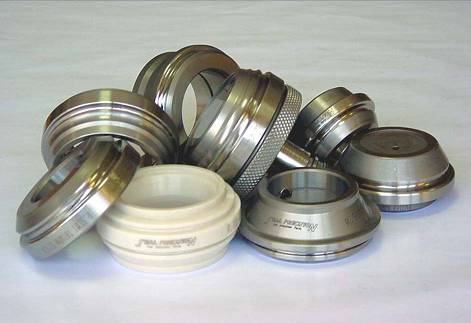 Seaming roll : It is the part of the seamer that performs the deforming operation of the metal, to configure the lid and body hooks and the link between them, giving rise to the seam. There are two types, the first operation, which forms the hooks and binds them, and the second operation, which crushes them together. It also receives other names such as: Trucks, seaming wheels, molars, seaming roll …

Seaming roll 1st operation: As we have said is the one that constitutes the hooks of the seam. Its function is more important than the 2nd operation, and its proper definition to achieve a good seam is essential.

There are many types in the market and their design can vary between them, although it is always linked to the type of seam that is to be made and the characteristics of the materials used in the manufacture of the container.

The critical area of ​​the seaming roll is the throat that acts on the wing of the lid, rolling it over the flange of the body, thereby generating the shape of the hooks between them. This area is called the profile of the seaming roll and usually has a curved contour, formed by several arcs of different radius.

This work only aims to give some guidelines on the dimensioning of the profile of the seaming rolls of 1st operation, depending on the type of seam used. Other considerations such as the material to be used in its construction, mechanical characteristics, adjustment of the same in the seaming machine, etc. they are treated in other works published on this Web page.

DESIGN OF THE PROFILE OF A SEAMING ROLL 1st OPERATION

The upper part of this profile starts with a slightly inclined plane, approximately 1º of slope, followed by an arch of great radius that links with other arcs that progressively decrease in radius. The number of radios can vary from a maximum of 5 to at least 3, although most often they are 3. Finally the profile ends in another inclined plane with a slope angle between 1st and 2nd. The profile has a lower heel that is more or less pronounced depending on whether the container is notched or not, or the type of seam. See figure # 1 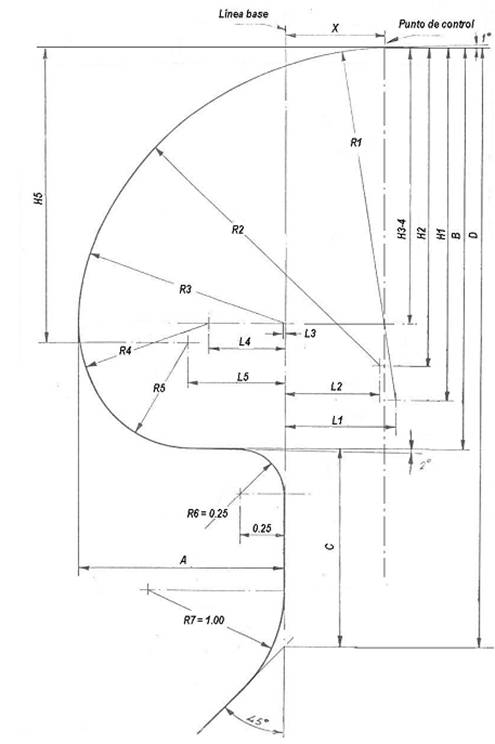 Keeping in mind this drawing, it is worth highlighting the following as important points of the profile of a seaming roll of 1st operation:

Control point : This is where the upper inclined plane ends and the entry arc with the highest radius starts. The vertical axis that passes through it is taken as reference to delimit the different height heights of the profile. From this point the seaming roll is adjusted in height in relation to the lip of the seaming head. The set that must exist between this point and the upper part of the lip of the chuck is 0.08 mm .. See figure n ° 2 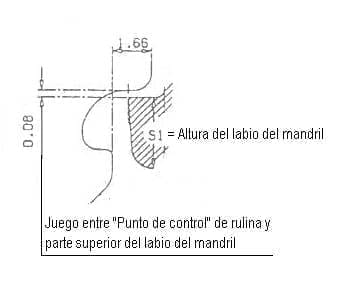 Baseline : It is the vertical line determined by the front face of the lower heel of the seaming roll. Defines the depth of the profile throat. It is taken as a reference to limit the measures of depth of this.

Radios : In drawing no. 1 a profile of five radios has been reflected, which is the maximum used in this type of pieces. Of these, the most decisive are the first (R1), the highest value, which initiates the bending of the wing of the lid, and the last one (R5), the smallest, which winds up the end of the wing and forms the hook of the wing. lid, fundamental element of the seam.

Measurements : There are a few stockings that can remain constant whatever the profile of the seaming roll, these are the upper and lower angles and the radii of the heel. The rest varies as we have said with the type of seam, which in turn is linked to the dimensions of the wing of the lid and the body flange, as well as the characteristics of the materials used in the container. Each company develops the ideal profiles to be used in each case, keeping some discretion in its dissemination. This gives rise to a multitude of solutions. We have selected in the table that follows the measures that the experience has given as good in each case, although we insist that there are many other alternatives.

On this table it is convenient to make the following comments:

–          Although in the drawing no. 1 a profile of five radios appears, in the picture only profiles of three radios are indicated, which are the most used. Therefore, the values ​​of R2 and R4 with the coordinates of their centers (H2, L2, H4 and L4) do not exist in these dimensioned examples.
–          All measurements are rounded to the hundredth of a millimeter. Therefore, in an exact geometrical tracing, slight errors may appear.
–          The dimensions marked with an asterisk (*) are approximate
–          On the drawing there are two dimensions that do not appear in the painting and that are determined from others. These are:
or        D = B + C
or        L3 = A – R3
–          Tolerances are not indicated. These should be the least possible.

The practical results of seaming rolls with these profiles, not only depend on their geometrical configuration, but also on the quality of the materials used in their construction, the surface finish, adjustment in machine, design of the seaming head, etc.