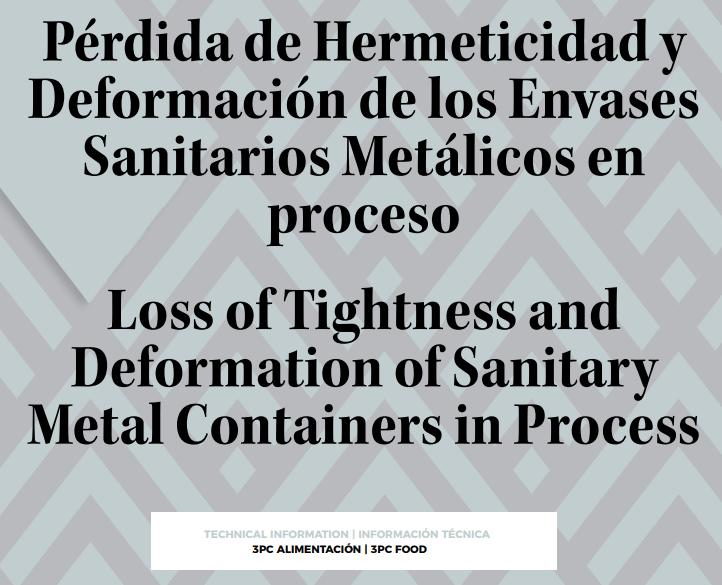 A canned food can be defined as any food packed in a hermetically sealed container and that has received a heat treatment equivalent to a commercial sterility, this allows to keep it edible for a long period of time, even years in normal conditions of storage at room temperature, in dry and well ventilated places.

Now the thermal treatment gives the canned food a long term microbiological stability within a food safety framework, as long as the airtightness of the container is guaranteed. At this point we can state that the shelf life of a canned food is directly proportional to the capacity of the container to remain airtight over time. Commercially canned foods have expiration dates that range from two to four years from the date of production, depending on the process used and the food packaged.

Depending on the final pH of the food, industrially produced preserves can be pasteurized or sterilized. The most rigorous thermal treatment is sterilization, which is carried out in autoclaves or retorts and is applied to low-acid canned foods (low acid canned foods – LACF) with pH above 4.6, such as chicken, tuna, sardines, shrimp, meat, beans, peas, milk and others. Here the cans can be heated to 121 °C (250 °F) in a closed environment of 1 atmosphere gauge (15 psi) or more for a set period of time, then rapidly cooled to ambient temperature and pressure. Thermal shock has a lethal effect on microorganisms, but there is also significant stress and fatigue on the material from which the cans are made, be it ETP tinplate, TFS, aluminium or other alloys.

Next, we are going to deal with the most common causes that provoke the loss of airtightness in food preserves, as well as the irreversible deformations that occur in the containers and that make their commercialization impossible. It should be noted that all the causes have a physical, chemical and microbiological origin, or a mixture of all of them caused by poor production scheduling, poor predictive maintenance, incomplete standardization of the autoclave bank, defective evaluation in the reception of containers, lack of training and others that we will deal with in due course as we progress. 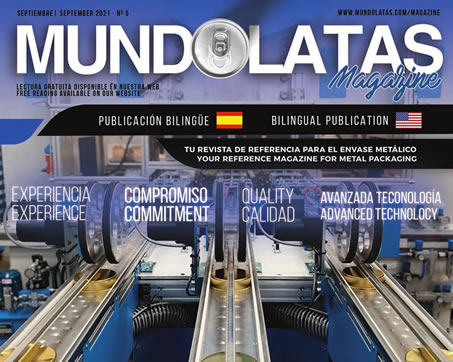 The sanitary containers used in the production of canned food have a nominal capacity declared by the manufacturer, usually in fluid ounces and in no case should be filled to 100%, it is important to leave a head space (head space) of about 4-5 mm, so that the food has a free space for expansion or expansion when heated in the heat treatment, otherwise there would be the possibility that the lid is lifted forming chunks or spikes.

Tall cylindrical containers should have a smaller head space because if they are filled when hot they may run the risk of being framed by the excess vacuum inside.

Non-vacuum canners can develop high internal pressures during heating in the thermal process, mainly in conventional direct steam atmospheric retorts. The excess pressure is the result of the normal expansion of the food gases and the air in the headspace, these pressures stretch the closures and bulge the lids causing from slight flip-ups to strongly convex lids.

There are industrial procedures to generate vacuum in the continuous production of canned food, such as packaging the food with the covering liquids heated to at least 80 °C (176 °F) or installing the steam flow system in the sealing machines, which injects a jet of steam into the headspace before assembling the lid, replacing the air present.

Vacuum measurement is done with vacuum gauges; normally cylindrical and tall canners report higher values, which can go up to 8-10 inch Hg. As a general rule, containers with a larger diameter or lid area that are concave show lower vacuum values. A practical way to confirm emptiness in a cannery is to place a drop of water on the side of the lid at the countersink (depth of rim) and when pricked the liquid should be sucked out.

Out of Specification Fasteners

Generating out-of-specification closures in the production of canned food is the most common cause for the loss of airtightness in canned food and leads to aggressive microbiological spoilage of the food. This event can be a risk for public health, for this reason the plants in their HACCP plan consider the closure or placement of the lid as a critical control point (CCP) and the limits or measures for the lid hook, wrinkles, body hook, closure height, overlap, etc. considered for the evaluation of the double closure are rigorously controlled by Quality Assurance personnel with standard parameters provided by the manufacturers of the sanitary containers.

The inspection of the double seal is very well implemented in canning plants, with destructive and visual evaluations, but what brings a greater risk and important economic losses is the bad assembly of the lid that generates, slopes, fall of the seal, Ve, sharp seal, internal fracture, skid or slip, false seal, cut seal and others that are not easily detected even by electronic devices when running lines over 600 cans per minute; defective cans end up stored in the finished product warehouses, contaminating everything around them, here predictive maintenance plays an important role.

T he incipient deterioration of the food is a product of the gradual microbiological growth that is generated in the production of canned food, especially when there is an excessive waiting time between the closing and the beginning of pasteurization or sterilization. This deterioration brings with it the formation of gas such as CO2, volatile amines and others that are produced by bacterial metabolism, which when enclosed inside the can and heated expands deforming the lid of the container.

This quality deviation is a consequence of poor production scheduling and also affects the organoleptic characteristics of the food such as: color, smell, taste and texture. It is clear that a correct balance of the raw material in all the productive stages and without bottlenecks would avoid this incipient deterioration that worsens in the hot season.

After heat treatment, canned foods are normally cooled with chlorinated water and one of the most common causes of deformation of the containers is the sudden drop in pressure inside the autoclave, at the end of pasteurization or sterilization and the beginning of cooling; At this moment the food inside the can reaches its maximum expansion due to heat and also the container inside it reaches its maximum internal pressure which can be up to 2 Bar (29 psi). If there is not a timely replacement of the steam pressure by compressed air at the beginning of cooling in conventional atmospheric autoclaves with direct steam, the container will come out with blown lids, with peaks, chunks and there will be a dangerous stretching of the double seal with a possible infiltration and loss of airtightness.

Another event, which also causes the deformation of the container during the cooling phase, is when the autoclave ends up completely full of water due to carelessness of the operators, only a sudden sound and the exit of water jets through the bleeders warns of this event and it is the precise moment when the pressure of the cooling pump with a minimum of 60 psi enters the autoclave crushing the containers, mainly those at the bottom which are colder.

As previously mentioned, the cooling of the canned products is carried out with chlorinated water, which must be at least 0.5 ppm of residual chlorine in the autoclave discharge and is carried out until the can reaches 40 °C (104 °F). If the can is cooled too much at this stage, there is a risk of external corrosion of the container due to remaining humidity and that the can unexpectedly generates a vacuum. The latter may cause the cans to be framed due to the pressure inside the autoclave and, more dangerously, cooling water may enter the can by suction through the seals that are still dilated.

Loss of airtightness and deformation of metallic sanitary containers in process. Part 2

quality control in the manufacture of metallic containers 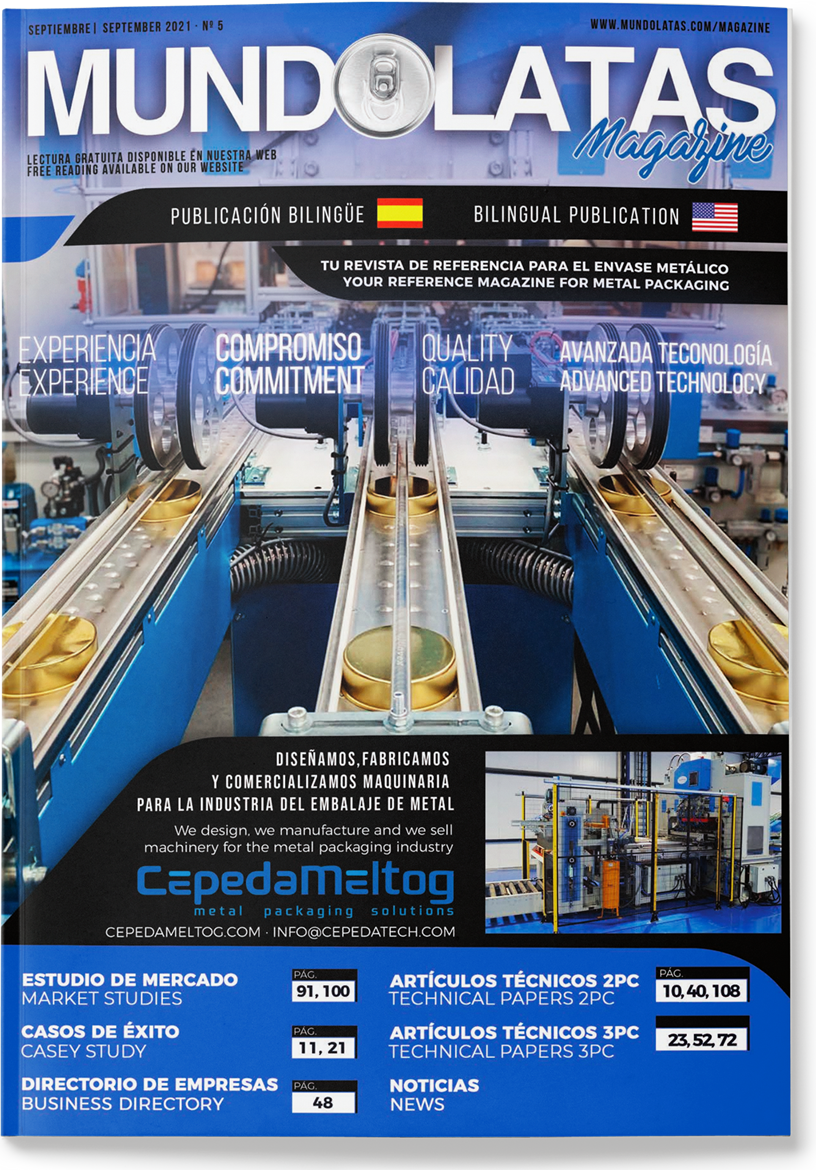