DECLARATION OF THE WAY OF DOING TIN

THE METAL CONTAINER AND THE WORLD, VARIOUS | 0 comments 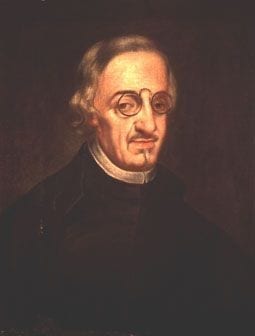 Because of its historical interest, we reproduce a handwriting from the 18th century – year 1724 – which describes how the tin was made at that time. The story he makes of the process is truly curious. At the end of it we make a transcript so that it can be read easily. 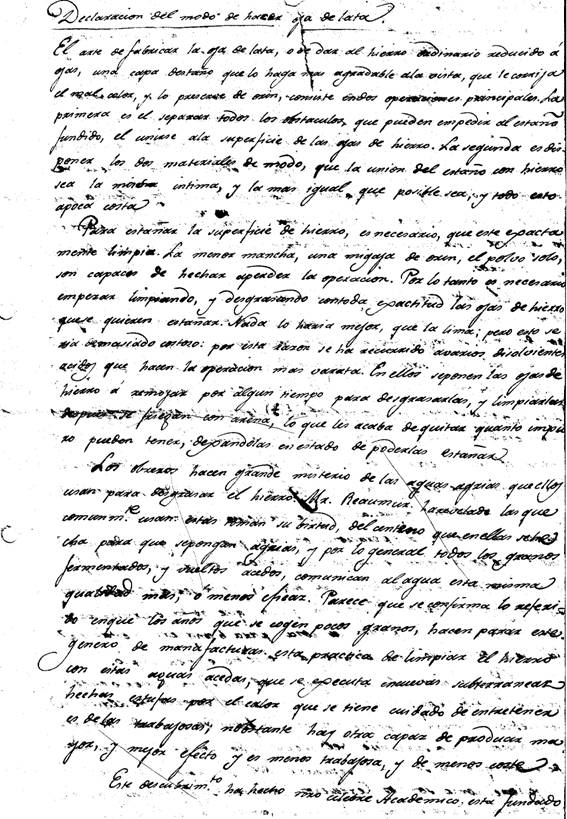 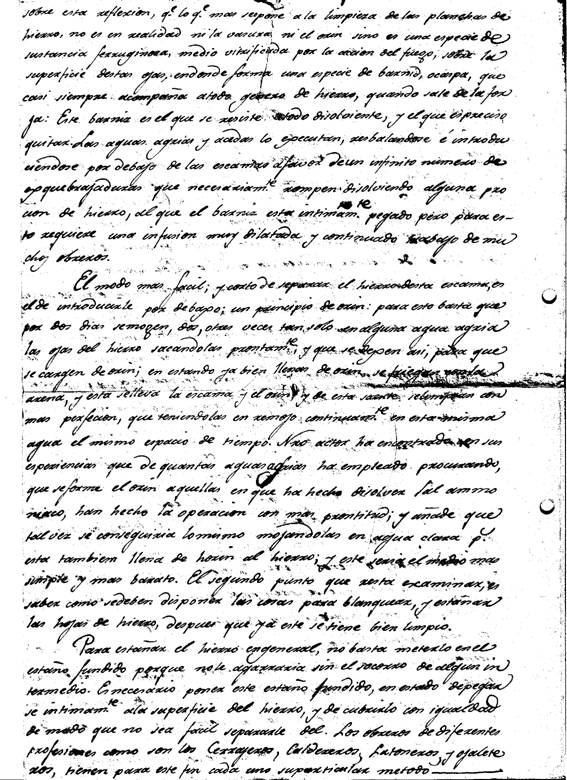 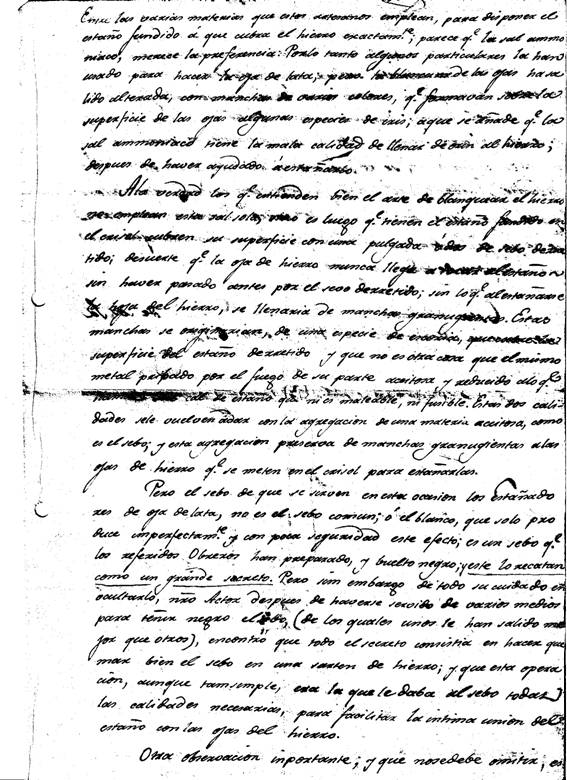 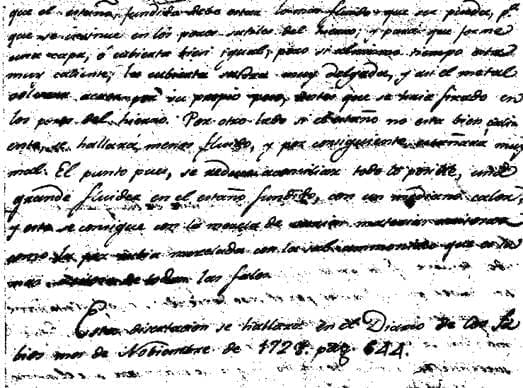 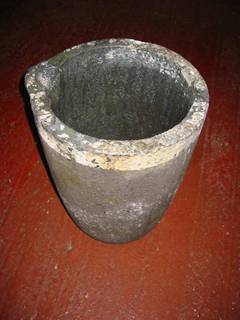 Reproduction of the previous text. In this transcription, its original spelling and syntax has been respected.

DECLARATION OF THE METHOD OF MAKING TIN EYE

The art of making tin oja or giving ordinary iron reduced to ojas a layer that makes it more pleasing to the eye, that corrects the bad color and preserves it from rust, consists of two main operations. The first is that it separates all the obstacles that can prevent the molten tin from joining the surface of the iron leaves. The second is to arrange the two materials so that, the union of tin with iron is the most intimate, and the most equal as possible, and all this shortcomings coast.

To tin the iron surface, it is necessary that it be exactly clean. The slightest stain, a crumb of rust, the dust alone, are capable of igniting the operation. Therefore, it is necessary to begin cleaning, and defatting with all accuracy the iron sheets that you want to tin. Nothing would do better than the file; But this would be too costly: for this reason it has been used several acid solvents that make the operation more varata. In them, lay the iron leaves to soak for some time to degrease them and clean them, then mop them with sand, which will finish off what impure they can have, leaving them in a state of being able to tin them.

The workers make great mystery of the sour waters they use to defat iron. Mr Reaumur revealed the common ones: they take their rye from the rye, which in them is sourced to make them sour, and in general, all the fermented and acidic grains communicate to the water this same quality, or less effective. It seems that the aforementioned is confirmed in that the years that few grains are taken, stop this genre of manufactures, this practice of cleaning the iron with these acidic waters, which is carried out underground encuevas made by the heat heaters that care is taken to entertain is Of the laborious, there is another one capable of producing greater, and better effect and it is less laborious, and of less cost.

This discovery has made another famous Academician is based on this reflection, qe qe what more seopone to the cleaning of the iron plates, is not really the gap or the rust but a kind of ferruginous substance, half vitrified by the action of fire, on the surface destas ojas, endonde forms a kind of varnish, ocaspa that almost always accompanies all gender of iron, when it comes out of the forge: This varnish is the one that resists all solvent, and which is precise to remove. Acidic and sour waters are executed, slipping and entering below the scales, in addition to an infinite number of cracks that necessarily break down dissolving some proportion of iron, to which the varnish is intimately attached, but for this it requires an infusion very dilated and continued work of many worker

The easiest way, and short of repairing the iron flake, is to enter below; a rust principle: for this it suffices that for two days, two or three times, only in some sour water, the iron leaves take them out promptly, and that they are dexed like this, so that they become rusty; in being well filled with rust, they rub with the sand, and this removes the flake and rust and thus they are cleaned with more perfection, than having them soaked continuously in this same water the same space of time. Our doctor has found in his experiences that from what bitter waters he has used, that the urine is formed, those in which he has dissolved ammonia salt, they have done the operation with more promptness; and he adds that maybe the same thing would be achieved by dunking them in clear water, p. it is also full of iron ore; and this would be the simplest and cheapest means. The second point that remains to be examined, is to know how to arrange things to whiten, and tin iron sheets, after this one is already very clean.

To tin the general iron, it is not enough to put it in the molten tin because it would not tie it without the help of some intermediate. It is necessary to put this molten tin, in the state to be absorbed intimately to the surface of the iron, and to cover it with equality, so that it is not easy to Among the various materials that these artisans use, to arrange the molten tin to cover the exact iron. It seems that the ammoniacal salt, deserves the preference: Therefore some individuals have used it to make the tin; and that the whiteness of the leaves has come out altered with spots of various colors; Some species of iris were formed on the surface of the leaves; that the ammoniacal salt has the bad quality of filling the iron with rust; after having helped to stain it.
separate it from the. The workers of different professions such as the Locksmiths, Boilermakers, Latoneros, and Ojalateros, have for this purpose each one their particular method.

Among the various materials that these artisans use, to arrange the molten tin to cover the exact iron. It seems that the ammoniacal salt, deserves the preference: Therefore some individuals have used it to make the tin; and that the whiteness of the leaves has come out altered with spots of various colors; Some species of iris were formed on the surface of the leaves; that the ammoniacal salt has the bad quality of filling the iron with rust; after having helped to stain it.

The truth is that those who understand the art of iron bleaching do not use this salt alone, but rather they have melted tin in the crucible, cover its surface with an inch or two of melted tallow; The iron eye never reaches the tin without passing through the melted tallow; without the ironing of the iron sheet, it would fill with granular spots. These stains would originate from a kind of slag that is on the surface of the melted tin and that is not other than the same metal pribed by the fire of its oily part and reduced to what we call tin lime that is neither malleable nor fuse . These two qualities return to it with the addition of an oily matter, as is the sebum; and this aggregation preserves from granular spots the iron leaves that are put in the crucible to tin them.

But the tallow that tin tin tinners use on this occasion is not the common tallow; or white, which only produces imperfectly and with little certainty this effect; It is a tallow that the workers referred to have prepared, and a black one: and this is respected as a great secret. But, nevertheless, of all his care in concealing it, an actor after having served several means to dye sebum black, (some of which have worked out better than others) found that the whole secret was to burn sebum well in an iron pan; and that this operation, although so simple, was the one that gave sebum all the necessary qualities, to facilitate the intimate union of tin with the ojas of iron.

Another important observation; and that it should not be omitted, is that the melted tin should be as fluid as possible, for it insinuates itself into the subtle pores of iron; and so that it forms a very equal layer or cover; but if at the same time it is very hot, the cover will come out very thin, and thus the metal will fall back by its own weight, before it had been fixed in the iron pores. On the other hand if the tin is not well heated, less fluid will be found, and consequently it will be very bad: The point, then, is to make everything as easy as possible, a great fluidity in the molten tin, with a medium heat; and this is achieved by mixing several oily materials such as blond fish mixed with the ammonia salt which is the most oily of all the salts.

This dissertation will be found in the Diario de los Sabios month of November, 1724 p. 644