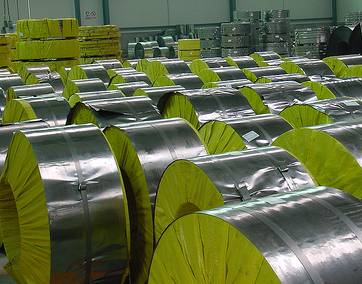 Description of the operations that contribute value to the final surface of the tinplate and how they contribute to its properties.

–          The final appearance of tinplate. Through it you can get bright, matt, stone, etc. appearances.

–          The adhesion on it of the lithographic systems, varnishes and inks. Also of the tonalities of the same with more or less gloss or metallic.

–          The resistance to the presence of scratches in the handling of the material.

In Fig. 1 a minimal detail of the tinplate surface is drawn on a large scale. It shows the elements that participate in the surface finish of it. These are:

–          Roughness: Depends on the surface type of the cylinders during cold rolling

There are two ways of acting on the roughness of the surface finish of the tinplate. One is getting different surface finishes of the working cylinders of the second box of the cold rolling mill, at the time of grinding them, and another depending on the refusion applied on the surface tin of the material. The magnitude of the tin coating also influences the finish.

We will clarify that the remelting of the tin is an operation that is carried out in the line of tinning, immediately after that of tinning and before that of passivation. It allows to give a bright finish to the tin, since the simple eletro-deposition of the tin produces a micro-rough surface with a matt appearance. In this operation an iron-tin alloy layer is produced, intermediate between the base steel and the superficial tin on each face, which increases the resistance of the tinplate to corrosive elements.

By acting on these variables, the following types of surface finish are obtained.

Brilliant finish : To achieve this finish, it is essential to obtain a mirror polish on the cylinders. This is maintained in the course of rolling through a polishing system “in situ”, reinforced with a suction device. It is, in effect, imperative to remove all foreign bodies, since their presence is detrimental to the desired appearance. It is also necessary to apply the refining of tinning. It provides the sheet with a bright appearance, while at the same time ensuring, as already mentioned, the formation of an intermediate zone of tin-iron alloy.

This type of finish is, next to the stone, the most requested. A sheet with a finish of this kind requires careful attention by the user so as not to damage its appearance.

Stone finish : The cylinders are subjected to two grinding passes with a special grain wheel that gives the product a striated appearance. The use of the cylinders thus prepared allows the supplier to ensure a more constant flattening, at the same time that a sheet is obtained that is less sensitive to the possible fine lines that may occur before tinning. As in the previous case, the tin coating is refunded, which ensures, in addition to the brightness, the obtaining of the tin-iron alloy necessary for a good behavior of the sheet in welding works.

It is a very used finish, the reduced double tinplate uses it as standard. It has been found in its use better results in the varnishing and printing, as well as a lower sensitivity of the sheet to the fine scratches that are always frequent in manufacturing lines.

Matte finish : Presents a slightly reflective surface. To do this, the cylinders are shot peened and the remelting operation after the tinning is eliminated. The tinplate in matt finish is not suitable for the uses in which the welding is used since the tin-iron alloy does not exist. On the other hand, it is suitable for crown caps, capsules or inlaid containers, since it can eliminate the application of the base coat or varnish.

There are other less used finishes such as:

Shot blasting finish: If the cylinders are shot with less intensity than before, a special shiny appearance can be obtained by tinning the strip with a low coating and applying remelting.

Silver finish: This type of finishing is done using cylinders strongly enlarged. The reflow pass gives the metal a bright appearance on the multiple roughnesses of the surface, which allows to obtain a great luminosity.

The penultimate surface treatment operation of tinplate is passivation. It lies in forming an oxide layer on it. This protective layer helps prevent oxidation, not only during manufacturing, but also in successive operations, such as varnishing. It has a decisive importance in the correct adhesion of varnishes to tinplate. The methods used are several, chemical or electro-chemical, designed each of them to obtain special characteristics. Normally they are known by the acronym USS and a three-digit number, the first indicates the type of solution (1 = chromic acid, 2 = chromium phosphate, 3 = sodium bichromate, 4 = sodium carbonate), the second indicates the polarity of the tinplate in the solution (0 = not electrolytic, 1 = cathodic, 2 = cathodic / anodic) and the third figure refers approximately to the current level used.

Within these methods the most used for its realization are three, designed each of them to obtain special characteristics.

These three basic types of passivation are:

–          Passivation 300: It is obtained by chemical process, by immersion in sodium dichromate solution, generating a layer of chromium oxide. It gives good results from the point of view of the adherence of the varnish, for this reason it is used for the manufacture of embossed packaging varnished or printed. It offers a weak protection against sulfuration. This passivation is however unstable. Its effectiveness is reduced over time, and the storage and temperature conditions influence it. For this reason the fast use of the sheet is necessary. It has a wide use in tinplate for packaging type DWI (sausages and irons) for beverages.

–          Passivation 311: Obtained by electrochemical process by electrolytic deposition in a bath of sodium dichromate of a chromium layer and chromium oxide. It is the most used passivation. It has suitable yields from the point of view of the adherence of the inks and varnishes, although inferior to the passivation 300. It is much more stable in time than the 300 and for this reason it is also used more and more for sausage packaging. Therefore it can be considered a compromise between the stability over time and the quality of the adhesion of the lithographic systems

–          Passivation 312: It is achieved by the same system as 311. In fact it is a passivation 311 reinforced. It is mainly used for tin cans that must resist sulfur products, such as meats, soups, products for dogs and cats … Its adherence to inks and varnishes is lower than 311. For this reason, passivation 312 is mainly used on tinplate that is going to wear nude

The different passivation treatments not only affect the adherence of varnishes, welding, etc., but also produce various forms of attack or staining when the tin is subject to contact with corrosive products or with sulfur compounds. Even from the static or presentation point of view, this detail is important, for example with condensed milk.

The following table summarizes the characteristics of these three passivations.

It is the final contribution to the surface of the tin. This operation consists of applying a very thin sheet of oil on both sides of the sheet.

This lubricant has several purposes:

–          On the one hand, protect the passivation and not to counteract the properties of this applies a very light layer.

–          On the other, it increases the protection of the tinplate surface against oxidation, avoids scratches in the handling of the same and facilitates the subsequent operations of varnishing, printing, shaping and handling.

The most commonly used method of application is by electro-deposition, although it can be done by spraying or immersion. The most commonly used lubricant is dioctyl sebacate (DOS) although other lubricants can also be used, such as: cotton oil, actil-tributyl-citrate (ATBC) and butyl stearate (BSO). These oils are natural or synthetic.