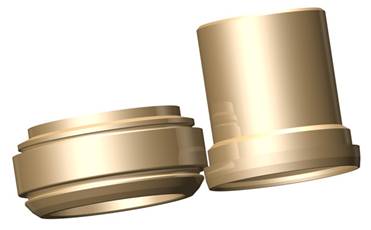 The seaming of containers are increasingly complex machines. The seamer speeds are very high in industries such as filling soft drinks and carbonated drinks, demanding a high quality of operation. Among the improvements made by its builders in recent years include the use of mandrels and rulinas – or wheelbarrows – closing, treated with titanium nitride

Traditionally, the closure tools were built with non-deformable steel for tooling, with a high chromium content. For example, an F521, according to the most common coding in Spain. With the use of titanium nitride coating, the steel from which it is split can be the same, even its finished treatment. The difference is in providing a thin surface layer of protection with this material. It gives it the characteristic golden color that we all know.

Titanium, with Ti symbol, is a silver-white metallic element that is mainly used to prepare light and strong alloys. It has high resistance to corrosion and great mechanical resistance , but it is much more expensive than steel, which limits its industrial use. The titanium burns with oxygen at 610 ° C forming titanium dioxide, and with nitrogen at 800 ° C forming titanium nitride (TiN).

The titanium nitride coating is a process in which the titanium is melted at high temperature, on the outer surface of the closure tooling, whether it is a mandrel or cart. In fact two processes can be used for the application of titanium nitride. One process is physical deposition (PVD), the other is chemical vapor deposition (CVD).

The difference between the two systems is drastic. PVD is used in low temperatures, for example at 480º C. It is really a cosmetic coating, which has little or no efficiency in the execution of the tooling. Through a progressive research development, the PVD system was soon eliminated as a serious method to improve the realization of the tooling of the seamers. The CVD system is applied at 1000º C, at this temperature is when the titanium actually melts on the surface of the material that is being coated.

In the specific case we are discussing, the deposition of a layer of TiN (titanium nitride) occurs on the chosen steel. For this, the TiN is at about 1000º C, in the vapor state and creates a layer that resembles the layer of oxide that the oxygen in the atmosphere would generate on a piece of steel. The difference is that this layer adheres simply by heat and contact. A strong union between both is maintained, because part of the steel diffuses towards the TiN and the titanium nitride diffuses towards steel, but does not react with each other so we can not speak of a chemical reaction. In truth it is a pure physical adhesion.

The CVD system has a proven track record. However, in the industrial production process, due to the high temperature that this entails, there is an important risk of distortion of the pieces. However, the specialized firms have managed to solve it satisfactorily by means of a very strict control of the process.

The coating is 3 microns thick. There are several reasons why titanium nitride was introduced:

1.- Increases the superficial hardness of the tools.

2.- Improves the surface finish considerably. This reduces the degree of damage of the external varnish that occurs during the closing process of the aluminum, tin and TSF covers.

3.- Substantial improvement in the life of the components, particularly in the closing trucks, where the duration has been extended 3 times on average.

This last advantage is particularly interesting in the construction of first operation trucks, which usually have a marked wear.

PREVENT THE SOURCE OF COATING PROBLEMS