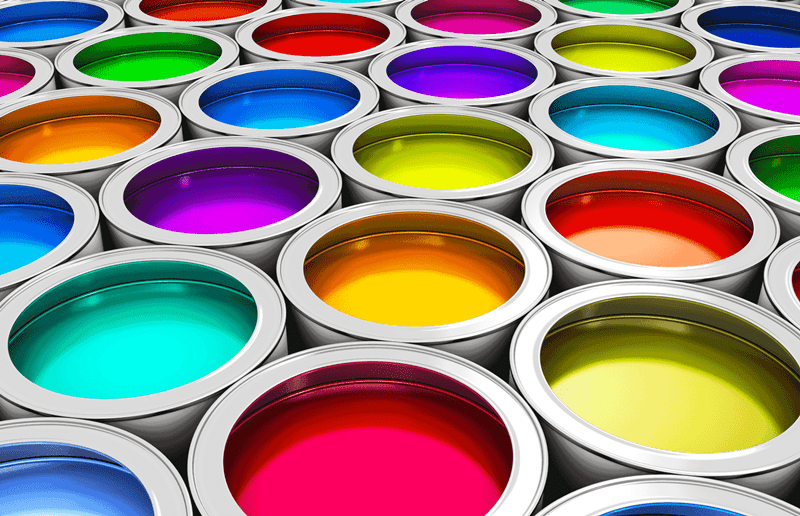 The technique of using a type of inks that dry by the action of ultraviolet radiation is relatively modern. This variety is called “UV inks” from the denomination of these radiations. The aforementioned technique is based on the use of special resins for the manufacture of these UV inks. These are generally high viscosity acrylic derivatives.

These resins have the property of polymerizing forming a solid film, thanks to the chemical reaction that occurs in them when they are subjected to the action of ultraviolet rays, emitted by special lamps. The results obtained with UV inks are perfectly comparable to those that can be achieved using conventional inks.

Light is in general an emission of energy in the form of electromagnetic waves, which are transmitted in a straight line at a speed of 300,000 km / sec. These electromagnetic waves, also called radiations, can be differentiated from each other according to their wavelength or frequency. Sunlight is what we consider white light and if we make it pass through a transparent prism, it can be decomposed in its spectrum of seven colors (rainbow) that, depending on its wavelength, range from the “ultra violet” zone. “Up to the area of” infrared “passing through the area that the human eye can perceive and that is called” visible light “.

A list of radiations from the shortest wavelength to the largest one includes:

Within visible light waves, the shortest is the violet color. We can define ultraviolet light as a set of invisible radiations for the human eye and located in the light spectrum beyond violet, with a wavelength shorter than that of this color and greater than that of X-rays.

The power of penetration in the matter of each radiation is also a function of its wavelength: A shorter length greater penetration power. Hence the danger of exposure to radioactivity or X-rays for a certain amount of time, given the penetration capacity in the organism that these radiations have.

The lamps that generate ultraviolet light used for drying inks are arc in mercury vapor and medium pressure, with quartz crystal. They work at high voltage. They are equipped with reflectors that concentrate the radiation in a narrow strip on the surface of the sheet to be dried. They generate a considerable heat that must be eliminated with a cooling system in order to ensure the duration of the lamps, their housings and the machine where they are mounted. They are also equipped with a protective shield to ensure that people can not be subjected to its light. Any individual working with ultraviolet drying equipment must be technically well trained to avoid any danger. This danger focuses on the eyes and bare skin since the radiation can not penetrate the metal protections, glass or clothing. In the case of the eye it would be like looking directly at an electric welding and on the skin the effect is the same as sunburn.

The action of ultraviolet light in the air produces ozone. Therefore, on the quartz surface of these lamps this gas is generated, which is dangerous from high levels. Therefore, these lamps are equipped with powerful air extractors to ensure that these levels are never reached.

As already indicated, results equal to those obtained with conventional inks are achieved. However, we must take some precautions with them, such as:

–          Avoid being directly exposed to the action of fluorescent tubes that emit a light close to the ultraviolet and could cause drying.

–          For the same reason, avoid exposure to sunlight that emits this type of light.

–          It is important that the surface of the used blankets is not susceptible to softening. Good results are obtained with the butyl type.

–          Use a minimum amount of water since UV inks absorb more water than conventional inks.

–          The use of UV inks requires taking the need for deep cleaning of the machine very seriously. If this comes from working with conventional inks, it is still necessary to make it more extreme since the smallest quantity of the latter can cause printing problems

The main effect that an inadequate use of UV inks can produce is the irritation of the skin, but only in case of prolonged contact with them. The solvents – which are different from those used for conventional inks – can also produce this irritant action, even to a greater degree than inks due to their degreasing power of the protective oils of the skin.

In general, it is necessary to take the same handling precautions as conventional inks, such as: Avoid contact with the skin, use rubber gloves, in case of contact, wash with soap and water, etc.

RECOVERY OF THE TIN TIN

Preventive Maintenance and Repair in a “two-piece” packaging factory (DWI)