AIR CONVEYORS IN THE METALGRAPHIC INDUSTRY 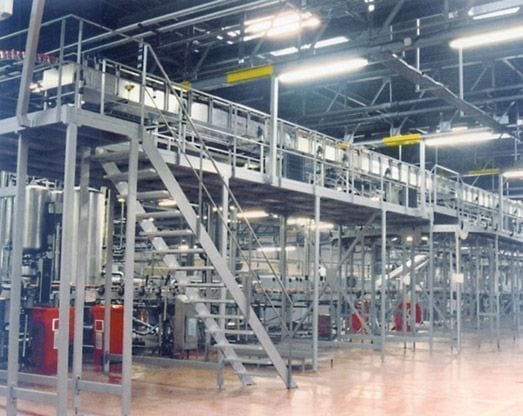 In this work the operation, applications and advantages of the air cushion conveyors are described. They transport the different elements to be moved, without the need to use moving parts, only by the thrust of air jets at low pressure.

The technique of transporting products by means of an air mattress is now half a century old. It appeared as a response to the needs of transport and handling at high rates, in high-speed production facilities.

Although its main application in the field of packaging, has been for the handling of PET bottles, it is also being used in the metal industry. Within it, mainly for the union between machines in lines of production of capsules, for example twist-off type, and of embedded packings of not much height, although it can be used for other applications.

WHAT IS A CONVEYOR FOR AIR MATTRESS?

The conveyor by air cushion brought a great innovation in the field of maintenance. Its principle of operation is very simple: a low pressure air stream, directed at high speed, creates an air cushion capable of lifting and moving the elements to be transported, eliminating the friction between these and the surface of the conveyor.

A system of grooves ensures these two functions, allowing horizontal transport both rectilinear changes of direction, and even the rise of slopes.

DESCRIPTION OF THE CARRIER

The transporter basically consists of:

The fan operates on a specific point of its characteristic curve, selected according to a low sound level, which generally coincides with its maximum performance.

On a typical conveyor, the fan is located at the beginning of the duct. When, due to the length of the conveyor, several fans are required, they can be placed on the sides or under the conveyor by means of reductions or adaptation parts.

The duct located under the transport surface constitutes the “pressurization chamber” of the air supplied by the fan; the air outlet through the slots permanently maintains a constant pressure inside this chamber.

The value of this pressure is a function of the air flow required, the product to be transported and the ascending slope in the circuit.

The adaptation parts are designed to achieve the best aerodynamic performance and allow the location of the fans at any point of the conveyor.

B.- Chamber of putting in pressure and distribution of air

The sizing of this part of the conveyor depends on the desired installation. Its height is usually small, of the order of 10 to 20 cm. and its length, in the sense of transport, is unlimited, since it is possible, if necessary, to add supplementary fans.

The choice between the options of installing a large fan or several smaller ones, always depends on the available site and the lowest cost. In fact, a large fan, feeding a large length of the conveyor, involves a pressure or air distribution chamber of considerable dimensions, to allow the passage of the necessary air flow, which is very high. As a general rule, a fan must feed only a few tens of meters of the conveyor.

One of the peculiarities of the system of formation of the air mattress resides in the angle with which said air is driven through the slots.

The grooves, obtained by stamping, are presented as lips inclined towards the interior of the pressure chamber, thereby leaving the upper face of the grooved surface free, smooth and without obstacles for the displacement of air and product.

These openings, represent 1 to 4 per cent of the transport surface, and are grouped in the vicinity of the feed point, in which there must be a greater flow of air to overcome the inertia of the product. This grouping or multiplication of grooves also occurs on the ascending slopes, since the component due to gravity must be overcome.

It is constituted by the lateral guides, and sometimes an upper cover, located on the chamber in pressure and distribution and forms the transport corridor.

For oriented transport, the guides are profiles that maintain the product in its initial orientation and carry or not another superior profile, depending on the product to be transported.

Physical study of the phenomenon

Consider only the three basic components of the air cushion conveyor: a) fan, b) duct or air pressure and distribution chamber, and c) slotted transport surface, and thus simplify the problem, to better understand the physical phenomenon, from which the effects produced by the use of air at low pressure are derived.

First, it is necessary to provide the air with a sufficient potential energy, identical at any point in the work area. This role is played by the fan that drives the air at low pressure in the pressure and distribution chamber.

Subsequently, this potential energy must be converted into kinetic energy, identical at any point in the work area and sufficient to sustain and displace the product. This transformation is obtained by driving the air at high speed through the narrow grooves in the sheet that constitutes the transport surface, these grooves being properly distributed.

Finally, it is necessary to give these currents or jets of air, a certain direction, in order to achieve the displacement of the product, following the desired route and maintaining a continuous air cushion. To achieve this, the inclination of the air jets will be constant, and the opening of the grooves will be directed following the circuit layout.

To summarize a little, we can say that the conveyor on an air mattress presents as a track for the displacement, the upper part of a chamber for putting pressure and distributing air, in which a fan is driving air at low pressure. This air leaves the chamber through innumerable grooves, throughout the entire chamber, in the form of air jets, which have an ascending component, to support the product and eliminate friction and another horizontal component, more important than the previous one, to drive and displace the product longitudinally, above the camera.

The shape of these grooves, determines for each of the different types, a coefficient that relates the necessary pressure and flow and the lift force.

From the considerations discussed above, it follows that the slots must be fed with air at low pressure (in the order of 10 to 250 mm.ca)

The specific tests on each type of product to be transported, in which the task to be carried out is taken into account, and the circuit to be traversed, allow defining the shape of the slots to be used, their separation (which is normally expressed as an opening percentage). in relation to the total surface) and the distribution pressure, which allows us to know the necessary air flow.

This flow is a function of:

–        Its transport speed, possible deterioration and characteristics of the product.

The distribution pressure is normally expressed in “groove speed”, that is, in the speed of air passing through the grooves.

The total flow is expressed by the formula:

S = Total surface of the conveyor in m2.

qo = Minimum amount of air needed in m3 per m2 of conveyor surface.

The Po and qo coefficients, as well as the type of groove and its separation, are determined by the experience or the specific test.

The power consumed by this transport system is a direct function of the total air flow required and its distribution pressure.

It is of the order of 0.5 kW per m2 of conveyor surface for lightweight products, such as empty metal containers, plastic products, cardboard boxes, et cetera, and from 1.5 to 2 kW per m2 for most products. heavy, such as metal strips, etc.

Depending on the type of feed to the conveyor, the weight of the pieces and their transport speed, the product flows transported are very variable.

In any line of manufacturing or treatment of products, at any time, and for very varied reasons (breakdown, maintenance, essential intervention, etc.) there are variations in the rhythm or cadence of the machines that intervene in that line.

When this phenomenon occurs, the only solution is to stop some of the machines and, eventually, store the production in transfer, until its resolution.

The stoppage of a machine does not only mean decreasing the production during the time that it lasts, but it must be considered a waste of time and, above all, of product, at the moment of its start-up.

The air cushion transport procedure has found the real solution to this problem, thanks to what is called “Dynamic Accumulation”, which consists of making the operation of the different machines independent, and of compensating or cushioning their production variations, through a storage lung, where the product accumulates,

The creation of this storage lung by this procedure, allows to accumulate the products without suffering friction, breakage, deformation or any other type of damage.

Also, since its only moving part corresponds to the fans, it does not require any kind of entertainment, and the cost of its maintenance is very low.

The accumulation is one of the great advantages of the air cushion conveyor.

With tapes it is always more complex to carry out accumulations, because the friction between the product and the band occurs, which deteriorates the elements, affecting their presentation, even deforming them or making them jump off the tape.

There are mechanical accumulators in the market, but they are usually very complicated technically, their price can be very high and normally, the last object that enters the accumulator is the first one that comes out, unlike the “Dynamic Accumulator” that always keeps the order of The elements.

The “grouping function” consists in bringing together in the same point objects or products of the same nature, that is, identical, but of different origin.

The “distribution function” is the set of operations that allows the distribution of objects or products of the same nature, that is, identical, to different points of destination.

They also allow us to optimize the operation of the different machines, depending on the needs of the market and manufacturing possibilities, and even guide us on the needs to increase or decrease the number of machines that perform the same function.

For both functions the air cushion conveyor is the ideal method, provided that the objects or products that are the object of this transport have a quick start on the conveyor.

The conveyor will be more versatile the higher this speed, since the time used in putting a device into production is a time that we can call “lost or useless”.

Some of the advantages of this type of conveyor are:

–        It requires a minimum maintenance. Except for the fans, it is a totally static element.

–        It is adaptable to any layout. It can be extended, increasing the number of fans.

–        Respect the product without deforming it, scratching it or damaging it.

–        It is flexible in terms of its innumerable possibilities. It has easy implantation. Allows accumulation

–        Allows to filter, dry and humidify the air to be treated. It allows the protection of the product with sterilized air.

–        It admits high production rates. Save labor It allows to absorb the micropairs, which increases production.

–        It allows more functions than other conveyors. Respect the order of introduction and output of the products. Regularizes the flow, that is, avoids the empty spaces that can occur in a tape.

–        It is active in all its zones. In the tapes, for example, there are products that remain stopped until they are pushed by those who come behind, not here.